Making Yourself Useful at Educational Meetings! 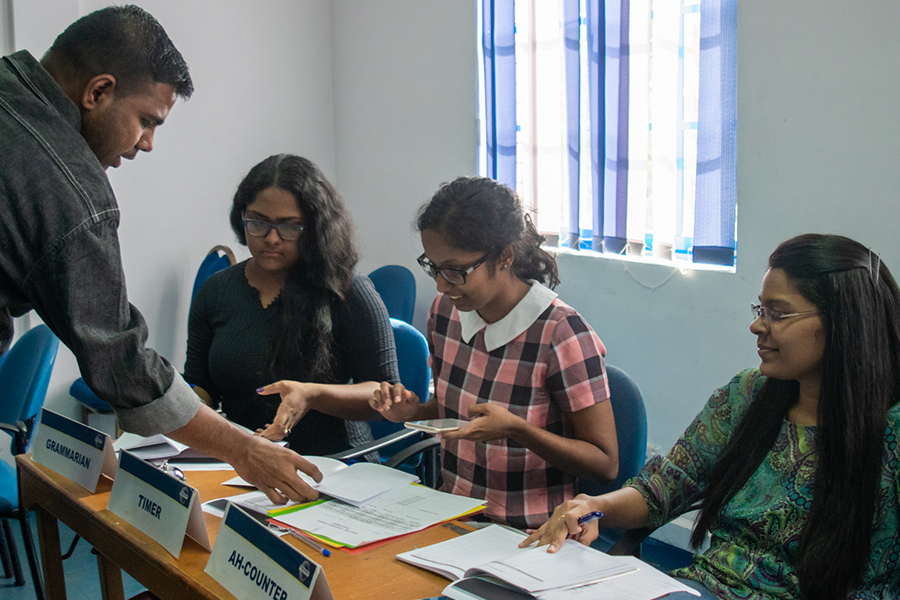 In the previous installment of “A Gavelier’s Survival Kit”, an introduction was made to the “Club Leadership Manual” which revolves around the various roles a Gavelier could perform at Gavel Educational Meetings. So, picking up from where we left, we thought that it would be a great idea to talk about the said ‘Meeting Roles’. If you’re someone who’s been newly inducted into a Gavel Club, or someone who wishes to join a Gavel Club in the future, we hope that this article helps you understand these duties much better. And, if you’re someone who’s been a Gavelier for some time now, and still haven’t got your head wrapped around these roles, don’t worry- just read on!

Getting straight into business, the meeting roles explained here appear in the order in which these roles would be performed at a general Gavel UoC Educational Meeting. Enjoy!

Every Gavel Educational Meeting as a ‘host’ who conducts the meeting and helps the other role players in performing their duties. The ‘Toastmaster for the Day’ makes sure that all role players have been informed of their duties and that they all are present and ready to carry out their duties at the meeting. On top of that, the Round Robin Master, Table Topics Master, Prepared Speech Evaluators and the General Evaluator are invited to conduct each session of the meeting, by the Toastmaster. Additionally, the Toastmaster gets the honour of picking the ‘Theme for the Day’, which is a great opportunity to make the Educational Meeting interesting for the members. All in all, from the moment that the President hands over the control to the Toastmaster, until the moment that the control is handed back to the President, the Toastmaster is responsible for the smooth running of the meeting proceedings. It may look like quite a daunting task, but it’s an essential step in learning to be a responsible leader!

Now the ‘Round Robin Master’ is not a role which appears in the “Club Leadership Manual”, but it is an essential role in Educational Meetings conducted by most Gavel clubs, specially Gavel UoC. The Round Robin Master, as the name plainly suggests, is the one who conducts the Round Robin Session, which was introduced by the Toastmasters in Sri Lanka. Since this is the only session where every member in attendance gets a chance to speak, the RRM has to make sure that every member is rightly instructed and encouraged to participate in the session. For an example, the RRM must inform the audience of the general rule of starting one’s 20 second speech with the last word uttered by the previous speaker, and encourage the members to use the ‘Word of the Day’ in their speeches. Also, the RRM can be creative in devising the session, such as by introducing a theme or a topic to guide the thoughts of the participants!

As the name rightly suggests, the Table Topics Master is the one who conducts the ‘Table Topics Session’ of the Educational Meeting. Preparation of the Table Topics which have a relevance to the theme of the meeting is an important duty of the TTM, which is a duty that needs to have been completed prior to the start of the meeting.These topics need to be easily understood by a majority of the attendees, so it is advisable not to prepare topics which are too complicated or are generally difficult to approach, while retaining the originality of the topics. It is always expected that the TTM make an enthusiastic introduction at the beginning of the session, where the purpose of the session as well as the necessary guidelines need to be stated. During the Table Topics Session it is necessary that members in attendance be encouraged to participate, and it is expected that the TTM encourage both experienced as well as new members to take the floor. In addition to this, the Topics Master can also come up with exciting new ways of conducting the session, such as by incorporating storytelling into the Table Topics!

The individual who conducts the evaluation portion of the Educational Meeting, is the General Evaluator. As the name rightly suggests, the General Evaluator’s duty is to evaluator the Educational Meeting in general, including the performance of the fellow role players and the technical details affiliated to the meeting such as the setting. As an evaluator, they are expected to point out the good as well as the bad, and to make appropriate suggestions for improvement. One of the most important duties of the General Evaluator is being responsible to the ‘Evaluation Team’, which consist of the Speech Evaluators, Grammarian, Ah- Counter and the Timer. Each of these role players needs to informed of their respective duties prior to the meeting, and during the meeting they are initially introduced and later on called forward to give their reports by the General Evaluator. In addition to this, as mentioned before, the performance of all the other role players need to be evaluated by the General Evaluator, which is expected to help these members improve their leadership skills. All in all, you must be a great listener and an even better evaluator and a responsible leader in order to make a good General Evaluator- but remember that there’s nothing you cannot perfect with enough practise and enthusiasm!

There are two types of speech evaluation in a Gavel Educational Meeting; Prepared Speech evaluation and Table Topics evaluation. Speech evaluation is a skill which Gaveliers and Toastmasters are encouraged to develop alongside their speech-making skills, which is why taking up the role of a speech evaluator at Educational Meetings needs to be seen as a great opportunity by all Gaveliers. Since there is another article which will be published here covering the area of ‘Speech Evaluation’ extensively, let it be stated for the moment that speech evaluators play a primary role in helping Gaveliers improve their public speaking skills, and that it is a role which must be carried out with great responsibility and attentiveness.

Every Educational Meeting has to have a designated ‘grammar nazi’, and the Grammarian is just that. One of the key duties of this role is to introduce the ‘Word of the Day’ to the attendees of the meeting, which needs to be displayed and explained with a few examples at the beginning of the meeting. The main purpose of this activity is to introduce club members to new words, and to encourage them towards expanding their vocabulary which is considered an essential quality of a good speaker. In addition to introducing new words to the members, the Grammarian is also expected to help them in improving their grammar and general language usage. For this, the Grammarian needs to listen to every speaker during the meeting and make a note of commendable as well as reprehensible language usage, and finally comment on these and make necessary suggestions for improvement in the Grammarian’s report during the evaluation session. The gravity of this duty makes the role of the Grammarian a very important one, which is why one is expected to be a very attentive listener and a type ‘A’ grammar-nazi in order to have perfected this role!

The Ah-Counter’s duty is somewhat similar to that of the Grammarian’s, in that it entails assisting the club members in improving their language usage in public speaking. It is quite common for an average speaker to utilize a certain amount of filler-words to help navigate their ideas in a speech, but a good public speaker is expected to refrain from seeking the help of filler-words. This is where the Ah-Counter comes in, to assist all Gaveliers to keep a check on the use of filler-words such as ‘ah’, ‘er’, ‘em’, ‘like’ and slang words such as ‘lit’, ‘low key’ or ‘AF’ during their speeches. As the name ‘Ah-Counter’ rightly suggests, this individual is expected to count the number of times such filler-words are used in every speech made during the Educational Meeting, and present a report during the evaluation session. But it must be remembered that the Ah-Counter is not just someone who counts filler-words and present a report on it; they are also expected to encourage fellow members in getting rid of such speech traits and to praise them in their attempts to do so.

Making one’s speech within a specific time limit is a skill that all Gaveliers practise during Educational Meetings, and it is to help them in this that the role of the Timer exist. At the beginning of the meeting the Timer is expected to inform all attendees of the time allocated for each speaker in the Round Robin session, the Table Topic session, prepared speeches and evaluations, and following which each speech made during these sessions need to be timed precisely. If it is customary in your Gavel Club to use aids such as ‘Timing Cards’ or a bell, the Timer must make sure to know how to display or operate these, and must utilize them accordingly. Above all, it is essential that the Timer stays alert during each of the speeches made at the meeting, so that they can give a clear, accurate report during the evaluation session. It must always be understood that the speakers as well as speech evaluators depend greatly upon the Timer’s report in order to evaluate the quality of the speeches, which is why the role of the Timer must be undertaken with great responsibility!

Now, even though as much details as possible have been explained here about each of these roles, it is always necessary that newly inducted Gaveliers learn the more intricate details about these roles by observing the senior and experienced members of our clubs perform these duties. Therefore, make sure that you attend more Educational Meetings and watch your fellow members tackle these roles; and last but not least, remember that practising these roles at meetings is the best way to perfect yourself at them, on your way to becoming a true Club Leader!