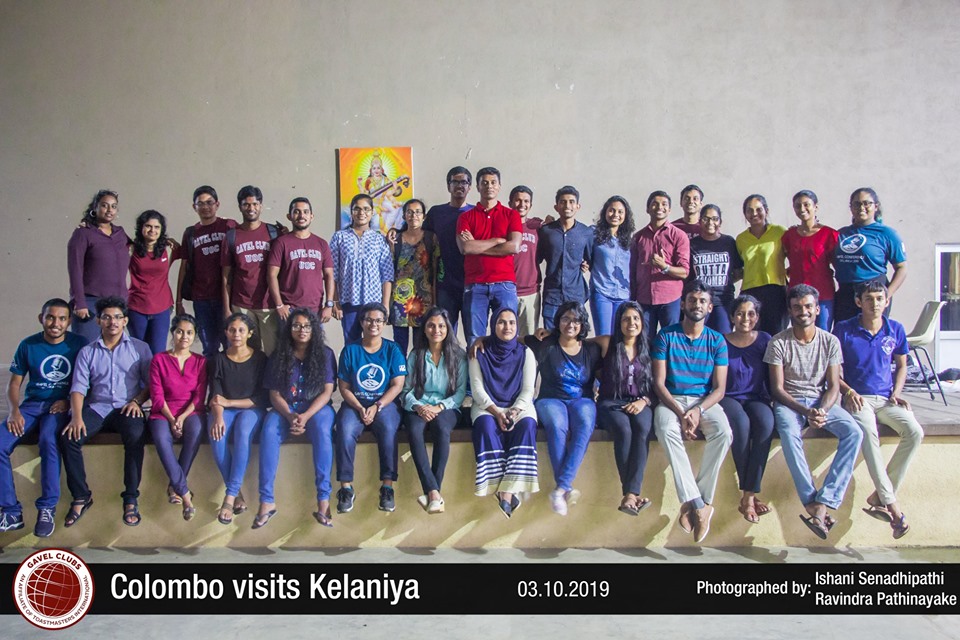 Have you ever wondered how to spend an evening which is encased in a pearlescent glow due to a sudden downpour, yet is blessed with plenty of buttery, warm sunlight?

Well, the Gaveliers of the Gavel Club of University of Colombo could find an ideal way to spend such an evening, as they chose to be in the company of some good friends, to have a chat, and to indulge in the luxury of being treated to a scrumptious array of snacks.


On 3rd October, 2019, members of the Gavel Club of University of Colombo headed over to the University of Kelaniya, with the intention of joining the Gavel Club of University of Kelaniya in their weekly educational meeting. The sun was baking the roads mercilessly with its blinding rays, and the thought of taking a bus ride could indeed make one’s skin crawl with perspiration. But the 15 Gaveliers who set off to Kelaniya were brimming with enthusiasm, as they were certain that friendly smiles and welcoming arms would be waiting for them at the other end.

They were not disappointed, as they were warmly welcomed by the University of Kelaniya Gaveliers, who made them feel right at home. They were led through the green canopies of various trees in the University, through a labyrinth of buildings, to the venue of the meeting. The Gaveliers of University of Colombo were overwhelmed by the sight of soothing greenery, and also, their curiosity to see the venue was also bubbling inside them.

The venue was quite exceptional. It had the style of an open air performance hall, but it was secured with a roof. Therefore, the participants of the meeting could protect themselves from the sweltering sunrays, while taking a glimpse of the natural beauty surrounding them. There was also a stage which could be used by the speakers. Therefore, it was quite obvious that the University of Kelaniya Gaveliers had chosen the perfect venue for the meeting.


The visitors were graciously greeted by the President of the Gavel Club of University of Kelaniya, GV Pubudu Jayasekara, and everyone were made comfortable, by aiding them to settle down. Afterwards, the meeting commenced formally, and the President of the host club declared the meeting to order, and handed the controls to the Toastmaster of the day, GV Nethmini Wijesinghe of University of Kelaniya. Showing the grace and wit of a fantastic Toastmaster, she introduced the role players of the meeting, and gave a brief introduction to the theme of the day, “The long Walk.” This topic was recieved by the Gaveliers both philosophically and personally, and they did not hesitate to add different shades to the topic with a flurry of diverse opinions, during the Round Robin session which followed shortly. The ideas ranged from Nelson Mandela’s “Long Walk to Freedom” to the distances they had to walk from home to the bus stop, and it was vastly entertaining and insightful at the same time.

The prepared speech session was extremely interesting, as four CC speeches were scheduled to spice up the evening, GV Uditha Weerasinghe and GV Dilshan Chandraguptha of University of Colombo owned the first half of the session with a CC4 and a CC1 speech respectively. The audience learnt the subtle wonders of mathematical operations, and also the art of loving the simple things in life, by listening to their speeches which were delivered with zeal and brilliance.

The Table Topic session was scheduled next, as an interlude to the prepared speech session. Gavelier Imara, being the Topicmaster, boosted the audience with enthusiasm, with innovative and interesting topics, tempting them to speak. It was a very interactive session, and the Gaveliers got to know many facts regarding their fellow members, such as the consequences of late night rambles, and the shock of encountering a kissing scene in a novel for the first time!

Yet, the session was interrupted by a sudden downpour, and the voices of the speakers were smothered by thunder and the sound of the pattering raindrops. As the venue didn’t have walls to block the noise, it was impossible to listen to the speeches. Therefore, the host Club went on the wise move of serving refreshments to the visitors. The flavor of cake, enriched with chocolate goodness, mixed well with the chilly winds of the evening.

The meeting recommenced in a short while, and the audience was yet again privileged to listen to two prepared speeches by GV Nethmini Wijesinghe of University of Kelaniya, and GV Malmi Gunarathna of University of Colombo, who completed their CC3 and CC1 levels respectively. It was an entertaining session, with much talk on how to make tea and the thoughts on being a human version of a four leafed clover.

The creative session which was scheduled next was a novel experience to the Gaveliers of University of Colombo. GV Ravindy who conducted the ‘Creative Session’ introduced a game of finding people, with the aid of their likes and dislikes. Much mirth, and good natured jokes were exchanged among the crowd, as the game proceeded.

The final chapter of the meeting was dedicated to reading the reports of the meeting and the evaluations. The president of the host club sincerely thanked the visitors in a few words which embodied nothing but candid friendship and warmth. He gave the opportunity of adjourning the meeting to the President of the Gavel Club of the University of Colombo, GV Uditha Weerasinghe. After expressing his utmost gratitude on the opportunity given to hold a joint meeting, displaying a splendid comradeship by the University of Kelaniya Gaveliers, he called the meeting to a close .


The members of the two Clubs mingled happily with each other, renewing their ties, and making new ones, while not forgetting to preserve this memorable evening in a snapshot. When the mauve twilight embraced the Kelaniya skyline, the visitors bid farewell to the hosts, and started their journey back home, with bodies trembling with weariness, but with hearts filled with bliss.


It was indeed, a pearlescent eve; a journey which involved much time and hardship, like an oyster securing a grain of sand. It was tough, stuck in buses for a long time on a scorching afternoon. But, the outcome was beautiful and precious, just like a pearl, and would be added to the string of memorable friendships created by the Gavel Club of University of Colombo.