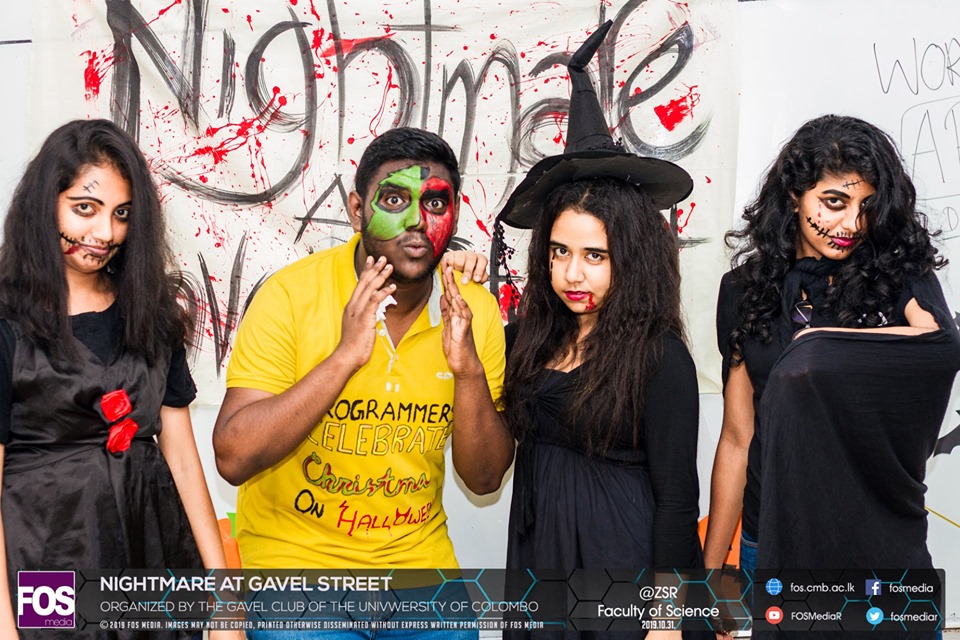 by Tharindi Jayalath
on November 5, 2019

May luck be yours on “Halloween.”

On a dark, gloomy evening of the final day in the month of October, a horrifying bunch of ghosts, ghouls, vampires and zombies made their way towards the ZSR at the Faculty of Science in the University of Colombo, for there was a night full of scary fun and fiendish delights awaiting them.

These creepy fellows were none other than the Gaveliers of the Gavel Club of the University of Colombo, and thus the annual Halloween themed meeting “Nightmare at Gavel Street” began.

The functions of the meeting commenced once the President of the University of Colombo Gavel Club, GV Uditha Weerasinghe, dressed as a serial killer from the 18th century, called the meeting to order and handed the controls to the Toastmaster of the day, GV Ramalka who was dressed as a pirate. She introduced the role players of the meeting and proceeded to give a brief introduction to the theme of the meeting which was “Halloween” of course.

The Round Robin session followed shortly and it was a fun and interesting game of “Fortunately-Unfortunately” which the Gaveliers enjoyed immensely.

The Round Robin session was followed by the Table Topics session which got the Gaveliers talking about what really rests underneath their “masks” and how to beat the ‘Dementors’ in your life.

As it was almost time to wrap up, the Gaveliers dived into the wonderful feast that was awaiting them.

After a crazy yet fun photo session, the Gaveliers bade farewell to each other on that spooky night of Halloween.

It was a wonderful experience for all the Gaveliers and everyone had a perfectly horrifying (not) time at the Annual Halloween themed meeting “Nightmare at Gavel Street”.