Of Walt Rathnayake and God 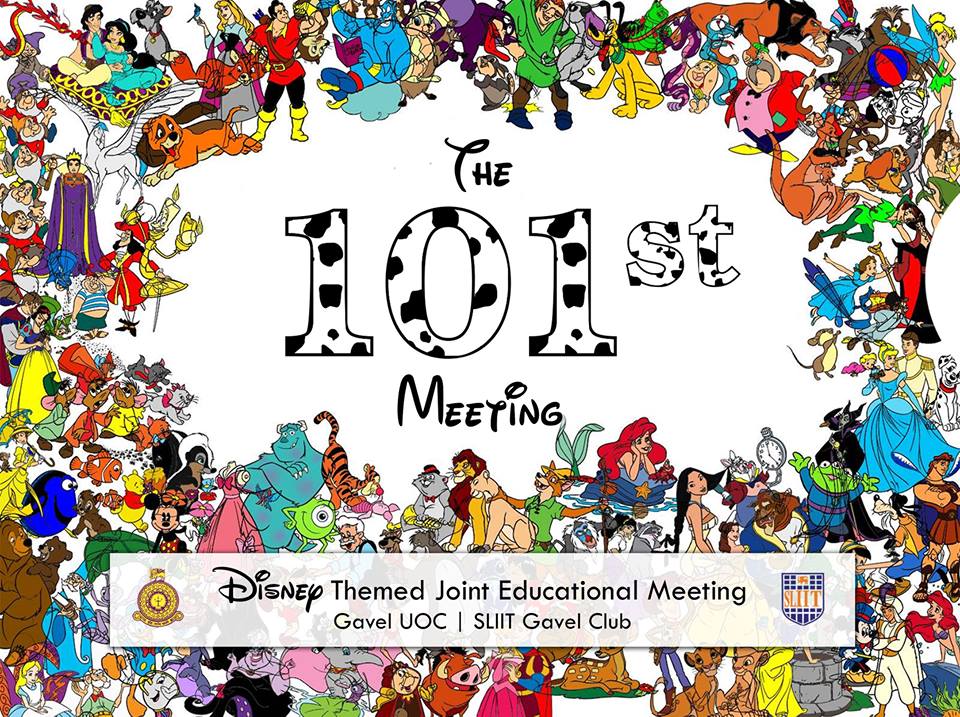 What if Walt Disney was Sri Lankan? And what if God was born in Sri Lanka and living here in Colombo right under our noses? Although the former is a spectacle one might witness in a parallel world, the gavaliers of University of Colombo and SLIIT had the good fortune of listening to the ice breaker speech of God AKA Gavalier Pulina at the Disney Themed UOC-SLIIT joint educational meeting held at the Faculty of Arts, last Wednesday.

The meeting started with a very interesting setting where many Gavaliers wore their favourite costumes from Disney characters barring Pixar and some more ranges; which obviously displeased some enthusiastic pixar fans. After the formal proceedings of welcoming the fellow SLIIT gavaliers, the round robin session was held where each member had to speak on the topic of “What if Walt Disney was Sri Lankan?” for 20 seconds, each successor taking up the last word spoken by the predecessor.

The imagination ran wild and as common as it is for a UOC Gavel meeting, many came up with interesting theories as to how Walt Disney would flair in a Sri Lankan setting. The room was clearly divided into two where some people thought he would still make the world stage with stories of Ramayana and Ravana, Reeri yaka and mahasona whereas some gavaliers thought Walt will be left unknown in a remote village painting some murals, or maybe even doing some illicit liquor trade. Gavalier Paba came up with the name Mickey Mudiyanselage Walt Rathnayake which led to some more names being brought of which Walt Disney would have been proud of the imagination level of Sri Lankan Gavaliers!

The prepared speech session started with a bang and “The light” when Gavalier Pulina AKA the God; or the other way around, who am I to judge? ; said “let there be light”. After spellbinding 306 seconds of his booming voice and compulsive storytelling , ‘God’ had indeed earned his place as an assertive speaker in the Gavel club; may be not on the pious side though.

Then it was time for the beautiful Sarah to take the stage. Compelling and captivating, she made sure that we knew she simply doesn’t listen to anyone and her Ice Breaker told us a remarkable story which taught us that life is indeed jumping into your worst fears nose up front and heart in mouth.

After two remarkable and awe-inspiring ice breaker speeches, it was time for the sudden death, the table topic round in which voluntary gavaliers had to pick a hitherto unknown topic and speak on it for two minutes. Being there last week, let me tell you, this is no simple task. However few gavaliers conquered the challenge in mind blowing fashion, whilst gavalier Thisura earned the best laughs and most raucous comments by his inspiring yet picturesque storytelling that some gavaliers received with wild imagination.

After one of the funniest and best gavel educational meetings in 101st meeting UOC Gavel history, it was time to say farewell to the fellow SLIIT gavaliers who shared this most beautiful evening with us. And it was sugar coated indeed, with chocalate cakes and cola.

As the sun went down painting the sky with a golden hue that beat Picasso’s best works, god went to his rat-ridden boarding place. And I walked back home with the memories of a colourful evening filled with pretty princesses, scary Scars and the promise of a feeling. A feeling that I belonged to a beautiful family, away from home.