The Exuberance of the 100th 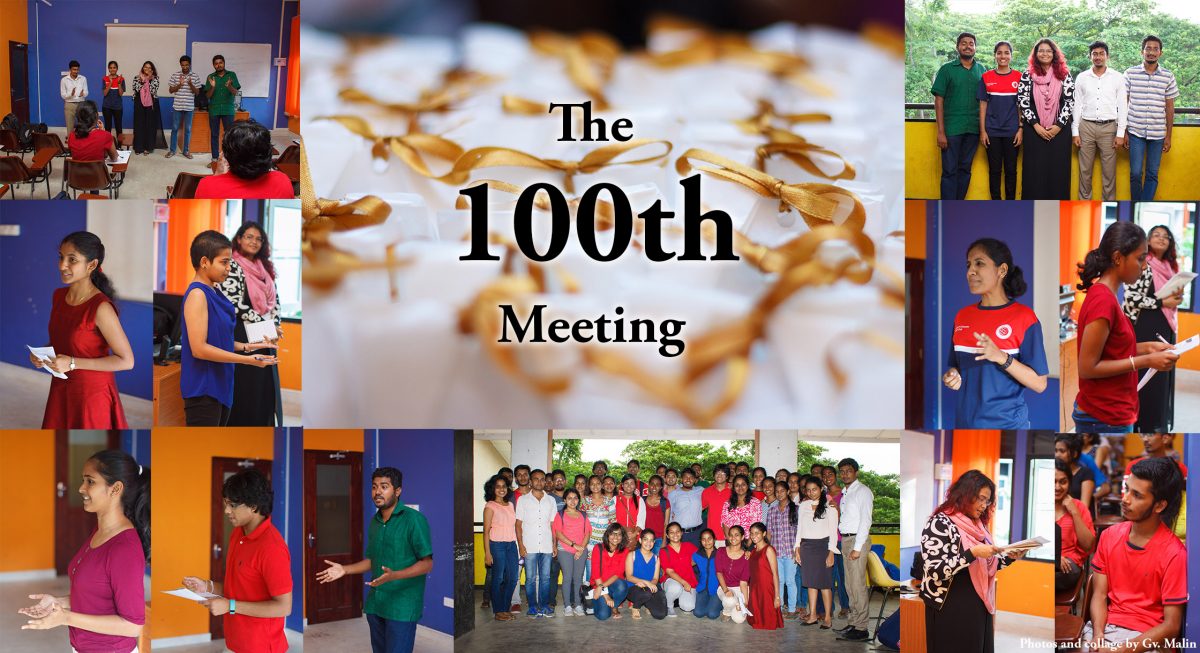 “We’ve made it this far. We can make it through whatever comes next.” — Daniell Koepke.

Assignments, mini projects, viva, internship, matches and many more things for a single week ! Despite all these, UOC Gaveliers found themselves at their best-loved place on every Wednesday evening to spend their time with the gavel family.

This weekly meeting was absolutely a special one because it’s the most important milestone meeting of our gavel journey so far. It was our 100th meeting ! By all means it was a day to celebrate and all of us were really excited for the evening.

Hall no 310 in Faculty of Arts was filled with chit-chats, giggles and laughter of newcomers as well as experienced members.

Madam President; Gavelier Vimukthini started the proceedings of the meeting by welcoming everyone who were present including the newcomers and our dearest past gaveliers.

The proceedings of the meeting was handed over to our Toastmaster of the day, a very special and humble person who was none other than Gavelier Shaik, one of the first members of the Gavel Club and a leading personality behind Gavel UOC.

He took us on the journey of Gavel UOC sharing his diverse experiences as a UOC Gavellier. It was a delight to see how they brought out this club for greater heights.

The round robin session was conducted by Gavelier Althaf and all the gaveliers enjoyed the session to its fullest. Many controversial ideas were expressed by UOC gaveliers blending with the theme ‘Colours’, making the meeting more colourful.

Gavelier Kamali unraveled the remarkable story of Eva Peron with her CC2 in this way:

“She had won the hearts of the poor people of Argentina when she died at a young age of 33. She was outstanding not because of her rise from poverty to fame but because of how she used her influence as a speaker to improve the healthcare and education in Argentina…”

Well, it was indeed really nice to hear her speaking. She conveyed a profound simple message, yet with a moving story.

Things got more excited and curious as an expressive Gavelier stepped on to the stage. “Grab every opportunity you get in your life and make the most of it”. It was the perfect opportunity for her to talk about the lessons she learnt over the past few years as an undergraduate of University of Colombo and what she spoke was purely words of wisdom. Gavelier Charuni was able to steal the audience through her vibrant speech and left a strong message with them.

It was a great day for the Grammarian Gavelier Ramalka as well. All the Gaveliers used good language along with the word of the day ‘’Exuberance”. It was used thirteen times during the meeting.

An insightful evaluation was given by Gavelier Farha as the general evaluator, encouraging the speakers further.

Then our beloved madam President took the stage with her lively and radiating energy reminding us to grab our piece of mouth watering chocolate brownies (yum yum!) baked by Gavellier Harith especially for our 100th meeting.

Thus, our 100th Gavel meeting was adjourned on an enthusiastic note with high hopes and plans for meet next week. It was truly a remarkable gathering.

UOC Gaveliers dispersed, bidding everyone a safe journey home, with the intention of gathering again at another blissful meeting.