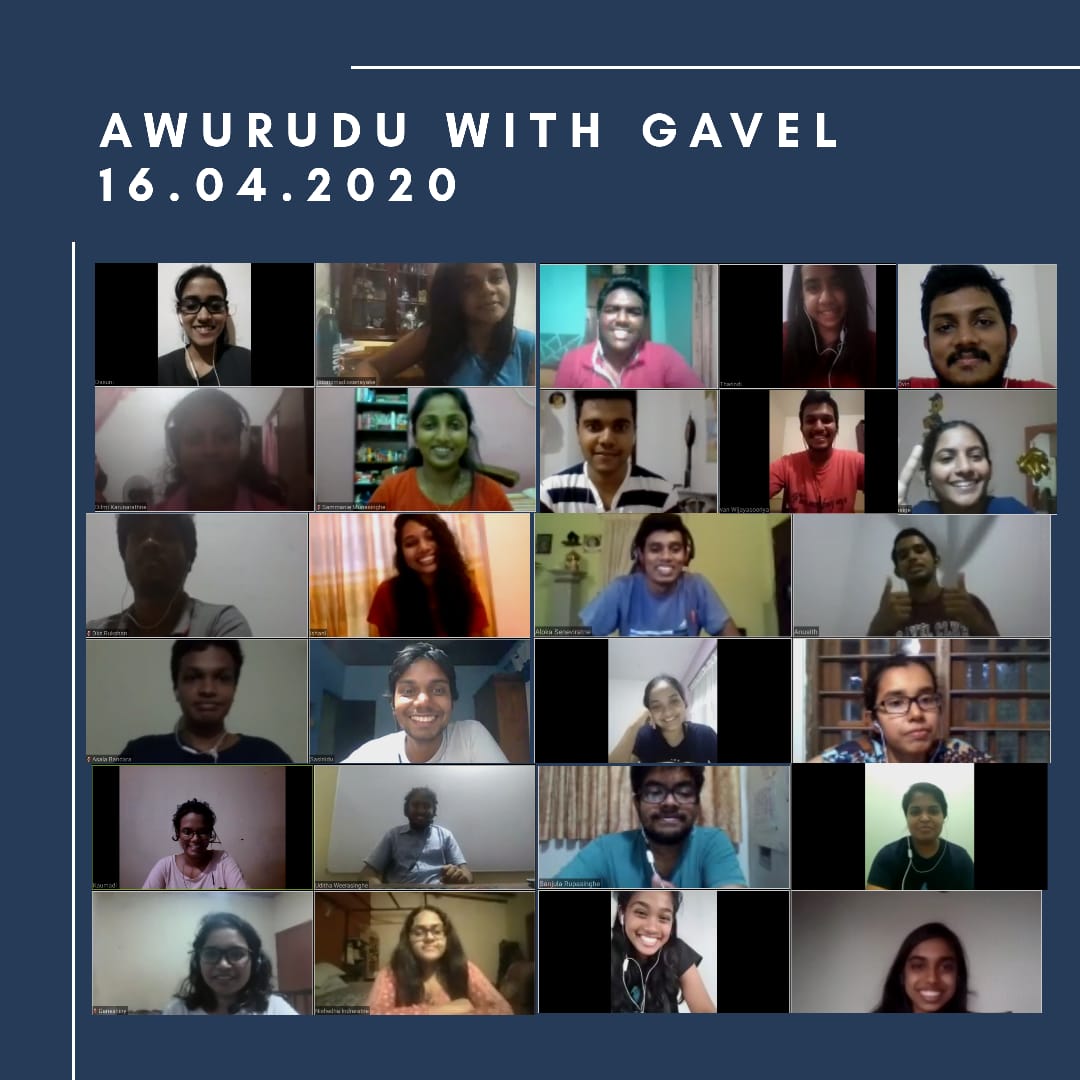 The Coronavirus pandemic has kept us all at home and is making the world suffer, as we know all too well. There are a few things that are benefitting because everyone is being forced to stay at home. We all know that Netflix is thriving, and our data plans are all going for a six, but one more thing that is benefitting from the virus (that I must admit, I never saw coming) is the attendance sheet for our Educational meetings. We have had two educational meetings so far, and we have had more than 35 members at each of them, and my little VPE heart is happy about everyone jumping at the chance to play a role at meetings. (thanks so much, guys!)

We did, however, miss out on having a good old Awurudu party this year – it is strange for us all to spend this wonderful time without the sound of bickering relatives in our ear, compliments about how much weight we’ve lost or how good our kevum is this year and worst of all – without “ganu-denu” (I personally am more interested in the “ganu” portion of the tradition).

Since Gavel UoC is famous for its slogan “Gavel Never Stops”, we decided to take Awurudu to a virtual level and see what we could do with the resources we have. What ensued was, at the very least,a good laugh for everyone that took part.

We had a few games arranged that we could play with each other online, courtesy of our very imaginative ExCo members at the helm. All of the roles were taken up pretty quickly for the educational meeting as well.

What first happened was a gritty, nail-biting contest to crown the Awurudu Kumaraya and Awurudu Kumariya – with many, many nominations to consider, about 24 hours to vote and campaigns launched by contenders all across their respective platforms, we racked in around 3000 votes – to have 3000 of anything is a pretty great thing at this day and age, so to have this sort of buzz going was amazing.

Our grandmaster and club President GV Uditha will tell you that the voting wars were tense, exhilarating and super unpredictable, as Gaveliers are known to be.

The 174th educational meeting – Awurudu in the Time of Corona – kicked off at 4pm on Zoom. With an audience of about 37 at its peak, the meeting was, I would say, successful! We had enough people to fill a physical room, virtually. Toastmaster of the Day, GV Nethma handled the meeting with confidence and grace, and all the other role players did their jobs exceptionally well. After 4 great table topics, we adjourned the meeting and got to the Awurudu shenanigans.

During the meeting, GV Ishani gave us clues about the “Sangawunu Amuththa” – a person so mysterious, so difficult to locate, that she had to give us two additional clues along with the original three clues that we got at the beginning. We really racked our brains on this, but only one of us emerged the winner (read on for the identity reveal).

What’s great about Gavel UoC is that we are all friends, so it is guaranteed that at any time of the meeting, some sort of joke will be made, laughed at, and hushed. Take away the serious(ish)ness of a formal meeting, and it is literally a bunch of friends hanging out and catching up, through a medium that we never thought we would need. The post-meeting fun began with a competition to see who could drink 1 litre of water the fastest. What started with around 12 competitors readying their bottles of water, progressing to scrutinizing if someone’s bottle was actually filled, to deciding what level of a 1.5-litre bottle should the water be up to, in order to qualify for the game and with random people having their screens off when they were supposed to be on (you know, the usual), the competition was afoot. As someone who watched this game, let me tell you – riveting stuff!

The great battle was won by GV Anusith, whose amazing feat will be remembered forever.

We then progressed to what was my favourite game of the evening (and you’ll understand why after the next few sentences) – Guessing the song! GV Kaumadi played out 6-second snippets of songs ranging from all genres (the 80s, 90s classics to rap to pop music) and participants had to guess the name of the song and its artist and scream it out loud for everyone to hear. If you got it right, you got a point. She was very lenient with us, even letting us choose the genre of music most of the time. What I witnessed here was a lot of “thinking face” expressions – and some of those were hilarious. We all yelled out the names of the songs and had the time of our quarantined lives. After playing for about 40minutes, GV Kaumadi added up the scores and declared ME the winner. While I soar on the wings of victory, I would like to say to all of my fierce and worthy competitors: good game; well played.

Next, GV Uditha indulged us all in a high-stakes game of “Kanaa Mutti” – his screen took over ours and we guessed with all our hearts to find the right one, but alas, this game was too great for us to conquer. It was great fun, though. The comment wars were interesting as well, with certain Gaveliers forgetting the “one comment per person” rule (you know who you are).

The results of the most important popularity contest ever were announced right after this – GV Uditha, in grand fashion, revealed the winners to us. The Gavel UoC Awurudu Kumaraya title was awarded to GV Sasinidu, while GV Jezeel won 2nd Place and GV Nilukshan was given 3rd Place.

GV Poornima was crowned Gavel UoC’s Awurudu Kumariya, while GV Nethma won 2nd Place and GV Udani won 3rd Place. All winners were, I’m sure, elated to have won. They were so overcome with joy that GV Sasinidu was too at a loss for words to formulate a speech! GV Poornima, revelling in her joy, delivered a simple, humble and Kumari-like speech to the audience. Congratulations to you all!

Next, the “Sangawunu Amuththa” was revealed to be GV Sahan – the revelation was met with a collected “ahhh” from the virtual audience, and GV Malmi was announced the winner of the game.

The meeting ended in typical Gavel UoC fashion – with members making jokes and talking while enjoying the musical stylings of various bands, chosen for us by our President with great care. While our call did come to a close due to time and Zoom constraints, I can say quite certainly that that was the most fun I have had in such a long time! I am sure that every Gavelier that was a part of that call would agree with me as well.

I hope and pray that the next festive meeting that we have is one where we can all meet, face to face, but given the circumstances of today, I am so glad that Gavel UoC came together to celebrate Awurudu with each other, however we could, with all the strength and positive energy we were able to muster. I would like to thank the ExCo for everything they all did to make the Awurudu meeting a great one, and I would like to thank every single Gavelier who joined in and joined us for helping us make this meeting a memorable one.

If this meeting is a testament to anything, it is to the fact that the slogan of Gavel UoC was very well chosen.