How We Made New Friends Without Leaving Our Houses 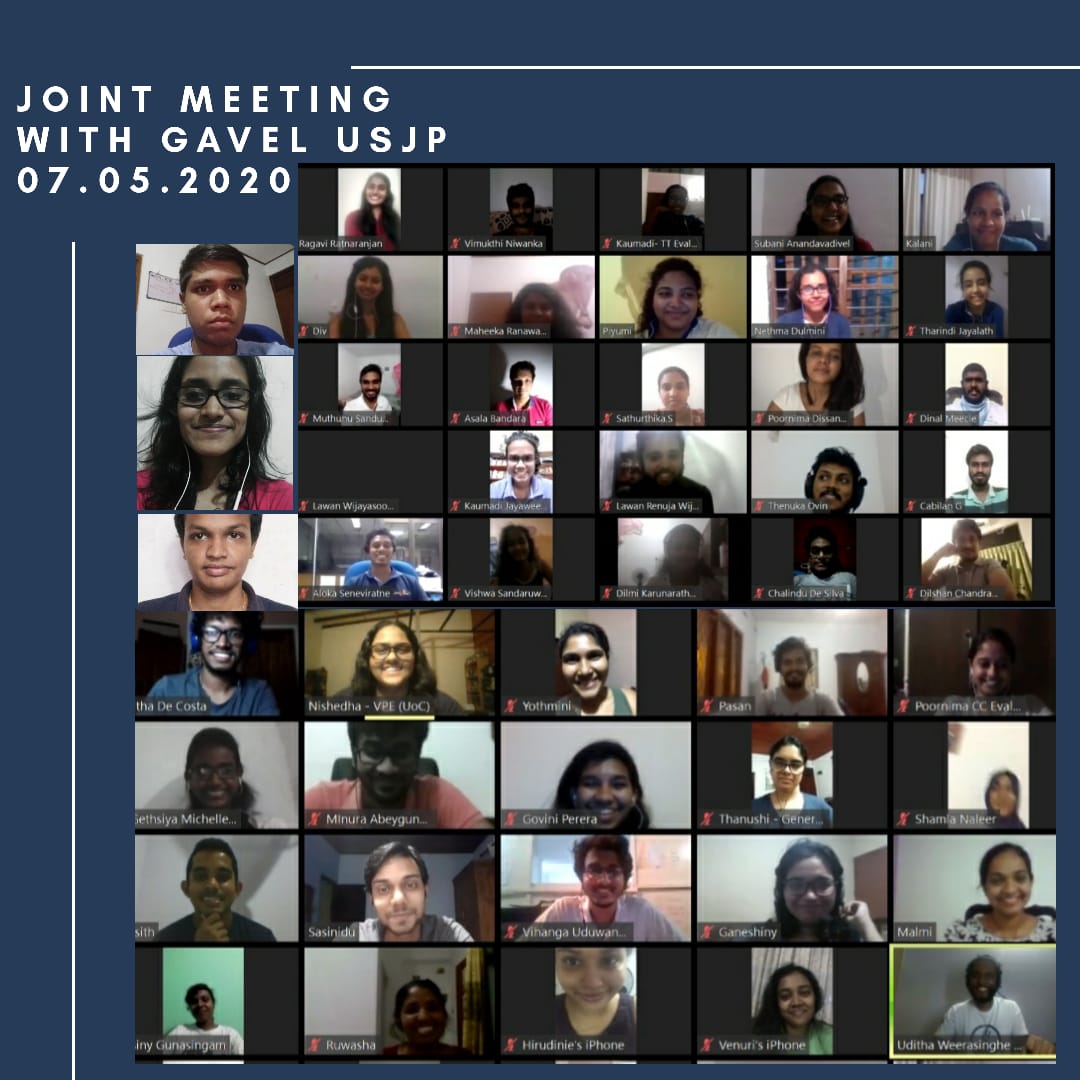 The 7th of May 2020 was a special day for us all; not because the curfew was miraculously lifted or the virus disappeared, but because we finally had the chance to see new faces and make new friends, while being stuck at home. The 7th of May 2020 marked the first ever Joint Educational Meeting that the University of Colombo hosted, and the other club that made this possible was the Gavel Club of the University of Sri Jayawardenepura. This meeting was our 176th Educational Meeting and will go down in history for a couple of reasons.

We didn’t think making ‘new’ memories would be possible at all, during the quarantine. We were so used to seeing each other, the familiar faces, once every two weeks (and that is a wonderful thing to still be able to do! Thank you, technology!) so it was especially exciting when we signed off on doing a virtual joint meeting.

The Gaveliers from USJP were wonderful sports, and together, their President GV Subani and our very own President GV Uditha set the meeting in motion. This meeting started off with 10 people signing in, and after a blink of an eye, it went up to 80. This kind of participation would not have been possible if this were face to face – we would simply run out of chairs and space. Everyone contributed to making this meeting memorable.

The Toastmaster of the Day GV Vihanga from USJP did an excellent job being in charge of the meeting and keeping the flow going – he introduced the roleplayers with fun and interesting facts about them, and made everyone feel welcome (which is usually difficult to do when you’re staring into a screen, but he pulled it off with ease). The Timer GV Chalindu ( USJP), Ah Counter GV Chathurika (USJP), and General Evaluator GV Thanushi (UoC) did a great job with their reports as well. Our Grammarian, GV Tharindi (UoC) introduced the word of the day: “solace”, which was used 16 times during the meeting! Our Table Topics Master GV Gethsiya (USJP) did a wonderful job with the topics she provided – the table topics speeches were great – speakers talked about whether they would not shower for a week or stay in the same clothes for a week (and creatively twisted the topic around to make it an inspirational speech), how they used to celebrate Vesak and how seeing the brightly lit roads would bring them joy (at this point, we were all hit with a wave of nostalgia) and about how the quarantine life is treating them. All speakers were applauded with a virtual and muted clap of hands.

We were treated to two CC3 speeches by GV Hirudinie, who spoke very well about the power of words and the impact that they have, and by GV Malmi, who regaled us with the use of emojis in everyday life, which everyone found extremely relatable.

Our Round Robin Master for the day, GV Shamla (UoC) deserves a non-virtual, very loud round of applause for the elegant and graceful way in which she handled her task – facilitating 80 people taking chances to speak for 15 seconds at a time. Our Timer, GV Chalindu (USJP) supported her in this endeavour as well. What transpired during this session was a historic 55-minute long Round Robin session. This is one of the reasons this meeting will go down in history, because not only did GV Shamla conduct the session with ease, everyone took the opportunity to speak as well!

The other reason this meeting will go down in history is because even though it was Vesak Poya day, we had 87 participants and not once did we hear a ‘bhakthi geethaya’ from anyone’s unmuted background. It was also amazing that so many people decided to be a part of this meeting. We not only got to listen to some great speeches, but also got to make some friends, see some new faces and talk to people we hadn’t met before, all because two Gavel clubs thought it would be good to try to have a virtual joint meeting.

We at Gavel UoC are hugely thankful to our Gavel USJP friends, who made this meeting exciting, fun and all-round a breath of fresh air.