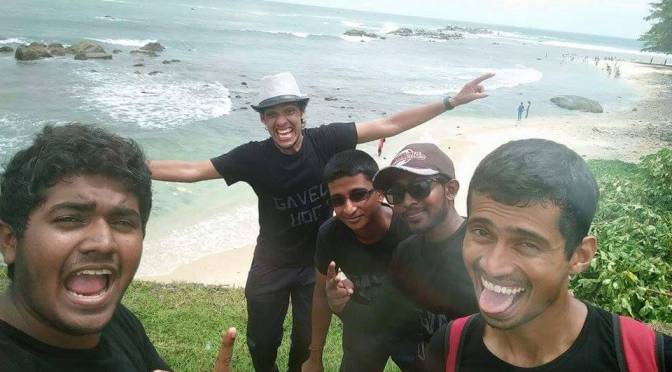 Be it the pirates of the Caribbean with their endless tales of long lost treasures or Luffy in search of the One piece (excuse the anime referance) we are in some form or another in search of something in life. Be it a better grades, a good job, a pretty girlfriend *cough cough forever alone* we all are truly hunters of that treasure in life.

The Gaveliers on the other hand went in search of a different treasure. The treasure of friendship, happiness and showing people what Gavel was all about. (Plus a cash prize wouldn’t hurt anyone either 😀 ) So off we went to the old Dutch Fort of Galle for the Around the Fort scavenger hunt organized by the Leos of District 306

Off with our fresh out of the mint custom T shirts the company of five stepped into the streets of Galle with profound determination and a shade of sleepiness from the long train ride.

From the moment the five entered the picturesque streets of the Galle fort one thing was in abundance. Selfies. Not one landmark was allowed to go unsnapped.

After a small briefing by the organizing committee the hunt began. In a scurry of people running like rats fleeing a cat, we were……well lost. Not knowing a head or tail of this alien place we did the next sensible thing. Follow the team ahead of you 😀

All was well until we learnt to our horror that the five of us were useless with maps that did not involve smartphones. And so the of the hunt was nothing short of a wild goose chase running from street to street, filling bottles with seawater, hand and mouth to finishing off at a completely different location. To answer your question… no we didn’t win.

But winning was never our goal in the first place. For one ,we competed as a Gavel club. And we took pictures. ….Loads of pictures. But more than that we made connections in a deeper level with each other. A deeper level of understanding that a mere educational meeting would not give.

So with a couple of hours to kill and after a hearty lunch at the Indian Hut (do check it out if you head to Galle) the most logical choice was to lie down, talk, chill.

The highlight of the day was when a sudden urge of doing a dubsmash overcame everyone and the next moment we were acting out the Titanic song in the streets along with a cameo by some Aussie girls on vacation.

All in all everyone reached home a loser of the scavenger hunt but a winner of the day.

Today I got the firsthand experience that the Gavel Club of the Colombo University is not just your average student version of Toastmasters. We don’t just help you improve on your speaking skills alone. We don’t just meet-up once a week and not see each other for another week. We are dynamic, different (and sometimes a little weird, in a good way). We make spontaneous decisions to travel 124 km two days before an event. Because we enjoy what we do and we do what we enjoy.

So come join gavel. We don’t just gather,speak and leave. We are more than that. We are a family.

PS: One Piece is a legendary treasure searched by Luffy; the protagonist of the Japanese anime cartoon One Piece.