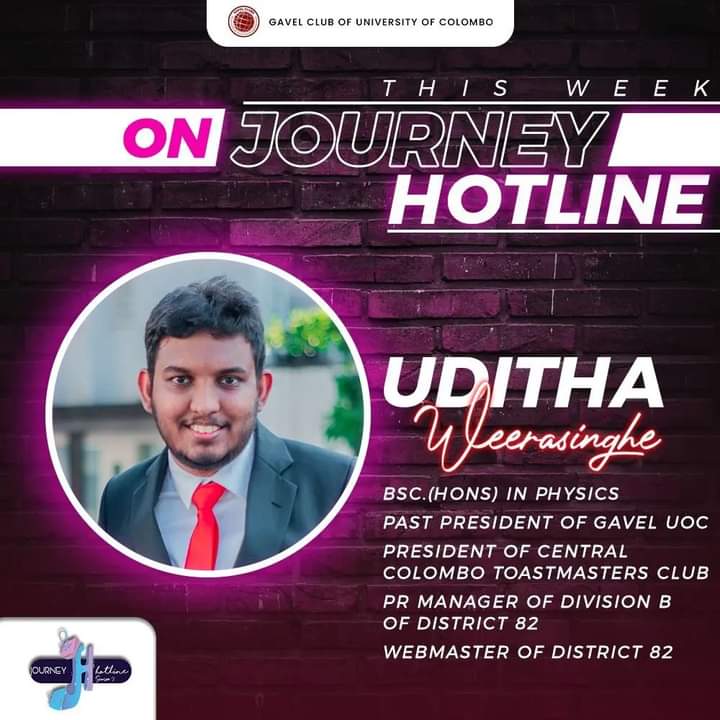 In this first episode of Season 2 of ‘Journey Hotline’, the Gavel Club of University of Colombo was pleased to be able to interview a proud alumnus of the University of Colombo, who was also a prominent figure in the Gavel arena. A former president of the Gavel club of UOC, he is none other than Mr. Uditha Weerasinghe, infamously known as ‘Hitler’.

Of course, Hitler ayya is no longer a student of UOC. He graduated with a Bachelor of Science, specializing in Physics, and is currently a teaching assistant in the Physics Department of UOC. When asked how he would introduce himself, he revealed his passion for blogging and public speaking, straightaway.

One might wonder how he got the alias ‘Hitler’. While he wasn’t questioned about this at the interview, it is no major secret, that his time at Gavel UOC can be compared to the prominent milestones of Hitler’s career, from the rise to the fall. And by fall, I mean merely an end of a chapter, of course. Gaveliers don’t fall, after all.

But how did he come to join Gavel UOC? Now, that’s an interesting question, with an even more interesting answer, for he joined the Gavel club, merely because of the calm and welcoming atmosphere in it. He admitted that he saw the club as some sort of a safe place from the external chaos in his university life at the time. One cannot choose their origin. One can, however, choose what to do, thereafter. And that is exactly what Gavelier Uditha did. His initiation into Gavel UOC may have been questionable, but what he did since joining is another matter altogether.

From going on gavel trips, to organizing Enliven 2019, from becoming the president of the Executive Committee in 2019, to attending the Annual General Meeting of the Gavel Community in 2020, Uditha ayya, was very much involved in Gavel, indeed. And it so happened, that during the afore mentioned Annual General Meeting that he attended, he found himself, to his utter surprise, being nominated for, and ultimately being appointed as, the president of the Gavel Community.

But of course, not all things go smoothly. This was the case for Hitler too. Enter Covid19 pandemic, and the whole world went up in flames, literally. He, along with several other senior Gaveliers and Gavel presidents, held many a meeting, to find ways to continue Gavel, despite the external obstacles. Under his rule, Gavel UOC even managed to hold Oration 2020, which was, in all honesty, one of the greatest events ever to be held by the Gavel Club of the University of Colombo.

But of course, every good and bad thing must come to an end. Even Hitler was not exempt from this rule. He signed off, with his head held high, having made Gavel, greater than it was before. However, that is not the end of his journey in the Gavel arena. Currently, he is the president of the Central Colombo Toastmaster’s Club, and has only begun his term a few weeks ago. He spoke about how Gavel in the outside world is different to how it is, in educational institutions like schools and universities. This is mainly due to the diverse people one meets in the outside world. So, it can be tough, finding your way in between all the chaos.

In his words, he gained a lot from Gavel, and thus, he wishes to give back as much as he possibly can. The interview came to an end with some valuable advices and insights from him. ‘Take that first step. Grab that opportunity, the moment you see it,’ he emphasized, addressing all the young Gaveliers out there.

Indeed, that first step may be hard, but once you get there, everything will change – for the better!