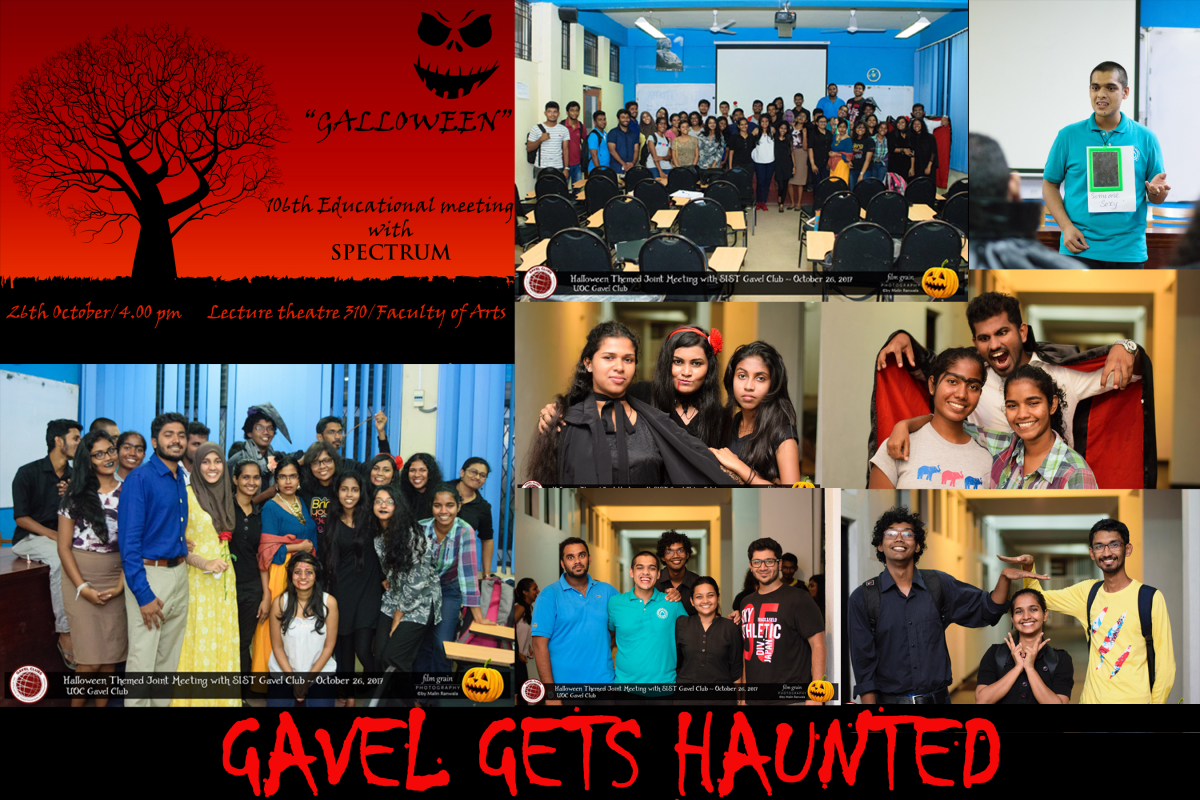 The Gavel Club of the University of Colombo experienced what it means to be ‘dead’ last Thursday.

The 106th Gavel meeting held on 26th of October, as a joint meeting with the ‘Spectrum’ Institute, celebrated Halloween by naming the meeting “Galloween”. By 4.00p.m. , the Faculty of Arts area of the university was invaded by vampires, zombies, witches, wizards, ghosts and Count Dracula himself. It was a different and very enthusiastic meeting for the gaveliers. About 15 members from the Gavel Club of Spectrum joined hands with the Gaveliers of the University of Colombo for ‘Galloween’.

The theme being “Insecurity”, gave them an opportunity to talk out loud about their fears, and getting dressed up as the characters one usually does not wish to encounter on a daily basis allowed everyone to face the fear of the supernatural in a more acceptable manner. Toastmaster Arshad was the Evaluator for the Prepared Speeches and Toastmaster Buddhima was the General Evaluator for the day. Their evaluations were comprehensible and effective for everyone, especially for those who wish to do speeches in meetings to come. Gavelier Haadil from Spectrum Institute conducted the Round Robin session. Gavelier Kamali and Gavelier Paba went one step further in completing their Competent Communicator manual.

The Round-Robin session was very successful and the word of the day- ‘Apprehension/Apprehensive’ was used more than twenty times!

Then came the time for the Table-Topics round, conducted by Count Dracula. The topics were as scary and interesting as the Count was. Many diverse and philosophical ideas came up as gaveliers spoke under the topics; “Why I fear vampires?”, “Of witchcraft and love”, “What if the Sun didn’t shine tomorrow”.

It was altogether a meeting jinxed with fun-filled horror. And it did seem that even if the whole world became a haunted place, the gaveliers would still continue their beautiful orations; no matter even if they themselves end up as the walking dead!