GAVEL UNDER THE TREES 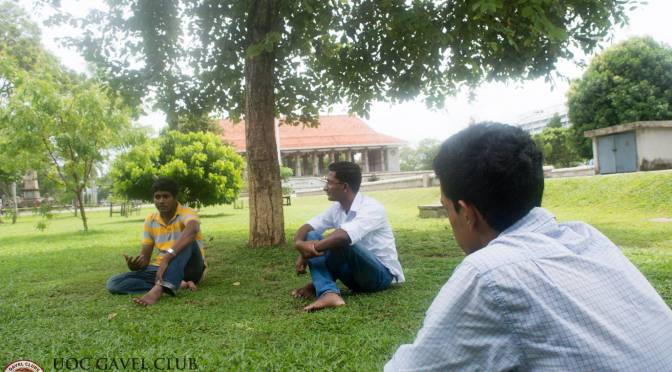 Smedley’s Toastmasters club organized a monthly meet up called Speakers Corner. It happened in August 2015 and Shaik shared a post about it on our Gavel Page. The cool thing about is – we get to see Mr. Dhananjaya Hettiarachchi.
For those of you who don’t know him – he was the World Champion of Public Speaking in 2014. He’s like rock star in Toastmasters – and we were part of his fan club. Basically you have to pay to see him speak and now we can do it for free. We managed to take a photograph with him and also took his autograph. That was awesome!

Anyway I was talking about this with Shaik and what he said was, “Why don’t we have a weekly meet up like this organized from our Gavel Club?”. I hope there are no copyright violations because we copied this idea from Smedley’s. A whole idea behind it was to have an informal gathering where people engage in discussion over various topics. We started talking about how we hate Mathematics, some of the best moments in our lives, our passions, on love etc. We had people from different age groups coming and its amazing the stuff they have to share with us. Also we did our prepared speeches because Best Speaker 2015 was coming up – the audience was good and they did a good evaluation.

It’s an amazing feeling sitting under the shade of a tree at Independence Square. In case it rained we continued it at the pavilion in race course: which was even better because you can get the whole amphitheater effect. When we started sharing pictures of our gathering so many people were interested in joining us. So in future we hope to get many Gavel Clubs and Toastmasters Clubs involved. The more the merrier!