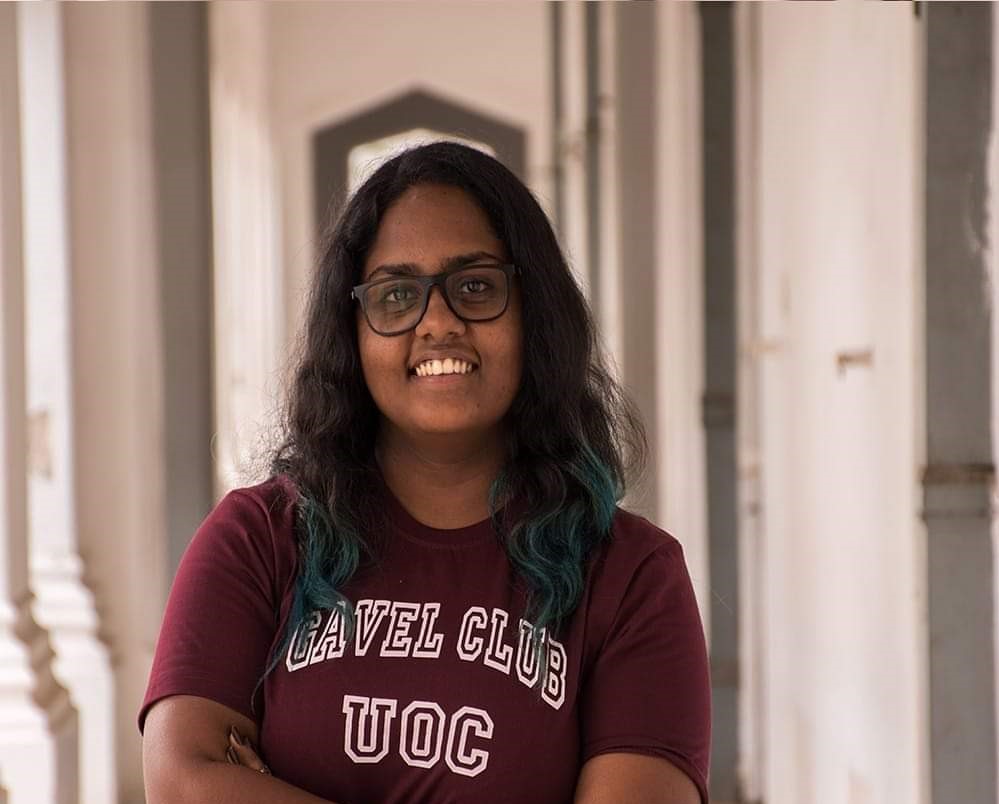 Although this whole “ExCo writes articles” thing was my idea, it took me until the last possible moment, to sit down and type this. This is because there is so much to say and only so many words that I can put in this before your eyes glaze over.

Buckle up, kids. This is going to be long.

I’m not one for visual theatrics, so I’ll try to make up for it with my words. Warning: Nish is about to get really cheesy and emotional.

Here’s a story about how a random, aimless girl turned into a VPE. Hopefully, this is somewhat funny.

When I walked into UoC on the heels of having completed a series of examinations at another institute and a random illness, I knew I was out of the loop (happens when you’ve let classes go on for a month before stepping in). I felt like I didn’t belong anywhere, and to be frank, I was fine with that. I thought I would keep my head down, do my degree, and get out.

However, our ever-famous recruiter Lily, had other plans for me. All I had to say was that I had prior experience at the Gavel Club at my school, and she was practically grabbing me by the hand and dragging me to a meeting the next moment. At my very first meeting I met some of the greats: Vimukthini, Harith, Lawan, Amra, Piyumi and co. I saw Vimukthini Akki deliver her CC10 and it nearly moved me to tears. I decided to do a Table Topic and went on a rant about something. The sharpest of memories from that day is when I saw, from the corner of my eye, Harith being ‘discreet’ and mouthing to someone “she is good!” with his signature facial expression. Thus, the name was written and attendance was guaranteed.

I remember getting so very lost, on the way to the ExCo interview. Cue Uditha texting me “good luck for the interview!” and all I could say was “I don’t even know where it is!” This may have been some sort of ploy so that his name would be the only one I would remember at the interview, but Uditha painstakingly described to me how to get to the place, and I went in, talked about things, and mentioned Uditha when I was asked who I would like as President. After I walked out, everyone else’s names came rushing into my head, and I wanted to bury my head in the sand because I forgot. Oh, well.

When the ExCo was announced, my best friend kept “text-yelling” to me something along the lines of “CONGRATULATIONS, MADAM VP” even though he had no idea what that meant. I was excited and also weary, because while I was looking forward to the prospect of working with an amazing set of individuals, I was also sighing at the prospect of repeating the VPE role for the third year in a row (school took my first two years). However, this experience was so much more different than what I imagined it to be, and I will always be thankful to Lily Akki, Amra Akki and everyone else who made sure I joined this club and got this job.

I call it a job because it is an important thing to do, and because I make sure that my work revolves around doing what I love. I love making friends and I love seeing and helping people doing things that they thought they couldn’t. I call it a job because I have to be on the ball every single day, and my phone and laptop is filled with one-person groups, agendas, discarded designs and ideas, lists of things to do and whatever write-up that Uditha wants done last moment.

Being the VPE of the Gavel Club of the University of Colombo was nothing short of a privilege. It was the role of a lifetime, and one that was designed for me, I feel. Easy for me to say, because I just finished playing this role, right? That is true. I truly didn’t feel like I had any restrictions on what I had to do and how I had to act (save for the sarcastic comments I wanted to make at certain events, that I had to swallow instead of spitting out, for PR reasons) and I had so much fun interacting with everyone. There were times that I had to tell my friends “sorry guys, I have a Gavel thing”, but that was never done with regret. Heck, I had an excuse to dress up like I was going to office and attend a ton of installations and workshops where we had free food, free music and world-class speeches to witness (thank you, Mr. President, for dragging me along). I also had to cut down my hours of sleep significantly, to accommodate changes, talk to resource persons, beg a few people to come for meetings and just be a VPE.

Each role in the ExCo has a set list of duties, but I find that we all went away from our duties and occasionally dipped into the duty of another ExCo member because it was needed – in that aspect, our ExCo ran as smoothly as one could hope.

Every single week, I typed out the message for roleplayers. It was the same thing that I sent every week, but I never copy-pasted. I always typed it out. I have no idea why I did that, either. I do think, that this is a metaphor for what I did with my role, in my term. Even though it may seem like every week is the same, there is a major difference – the people who take up roles, the people who take their first step to do a “podi” role, the people who decide they want to try out for a “loku” role, the people who text me shyly saying “I want to know how to do a CC1”, the people who I nag to be evaluators for speeches and the people I run behind at the last moment to fill in for an absentee are all different, week to week. This means that I have spoken to over a hundred people in this year, about roles, speeches and the Gavel club in general. This meant that I got texts from unknowns at midnight, multiple messages at 5.00AM and last minute (like, a few minutes before the meeting) messages from members asking what to do, how to do it and whether they can drop out. Each time, I have had to answer. Sometimes, I would be a little stern and push against the opposition and make people do things (Hi, Ishani and Malmi!) and sometimes, I would have to sigh, say “yes sure, no worries!” and resort to bothering someone from the ExCo to fill the role.

When we moved online, and when the newbies rolled in, I found myself answering, nurturing and mentoring quite a few kids, and I loved every single minute of it. The biggest payoff of all time, for me, is seeing one of you take the screen and deliver a perfect speech without fidgeting, seeing you take up a role and saying “I know what to do, akki”, is seeing one of your texts that read “Nish, I want to be TMOD this week, is the role available?” It started from the bottom, where I had to coax people to be the Grammarian, and now I leave this role, with club members booking roles in advance and asking for explanations on roles instead of saying “I can’t do it”. This is great progress, and it is the proudest I have ever been and will be, in my life. It gives me great joy and honour, on my birthday, to look back at a year full of good times, and know in my heart that even though my ExCo had to function through a national security crisis and a national health crisis, we pulled off something great.

I would like to thank you for putting up with this senile fool, entertaining my weird ideas and helping me carry out everything that I wanted to do, for this term. I walked in not knowing any of you at all, and I leave knowing at least one embarrassing thing about you. The memories we have made at the Greens, at Deanside and at the many installations we visited, will stay with me forever. Thanking for being one of the greatest teams that the world has ever seen (this is for whoever was looking for a One Direction reference in this article).

To the close friends that this club has given me (you know who you are),

Never did I think that I would make great friends this late in life (I’m old now), but once again, life surprises me. I have shared tuk rides, walks, food, drinks and secrets with you, and some of you know me better than most people. I am so very grateful for the life-long friendships that this club has helped me create.

I leave you the most precious thing in the world – the trust of the members of this club. It has taken many sleepless nights and discussions to build the trust that we have with our membership, and I give it to you with the faith that you will keep the flame burning and keep the banner flying. Wishing you the best of luck and greatest of years.

You have grown so much over this year, and I am honoured beyond measure to see you take the stage or screen and show off your confidence and convince people of your ideas. It has been a pleasure listening to your Zoom rants, voicenotes, reading your scripts and making changes, and overall, seeing you go from “aneh, I’m shy” to “Nish, did you check it yet, I want to start practicing with the final draft”. You don’t know what it feels like to see that happen, and I am filled with pride when I see you step up to the plate and knock it out of the park. Thank you for letting me guide you. Now get started on the next CC!

Finally, to my dearest Gaveliers,

It has been a pleasure being your VPE. This is the stark, honest truth. Without your earnest and dedication to learn from this club, grow with this club and give back to this club, we would be nowhere. I can attribute this success to the Education Initiative, but there is a reason why I didn’t mention it before: the truth is, the growth of this club hinged on you, and it still hinges on you. We can have grand plans and ideas, but it is ultimately your support and excitement that helps to see them through. You are one of the most important families that I claim ownership of, and you are precious to me. I will kill for this club (although I hope I don’t have to) and I promise to help out in any way I can. You have made this girl very happy and carefree. Not once in this club have I felt marginalised in any way, and I thank you from the bottom of my heart.

That ends my string of letters. Thank you for reading, and thank you for sticking. Thank you, finally, for being my home away from home – Gavel club is truly the one place I can walk into, sit down and be myself, without judgment, and that is why our Gavel Family is special and real.