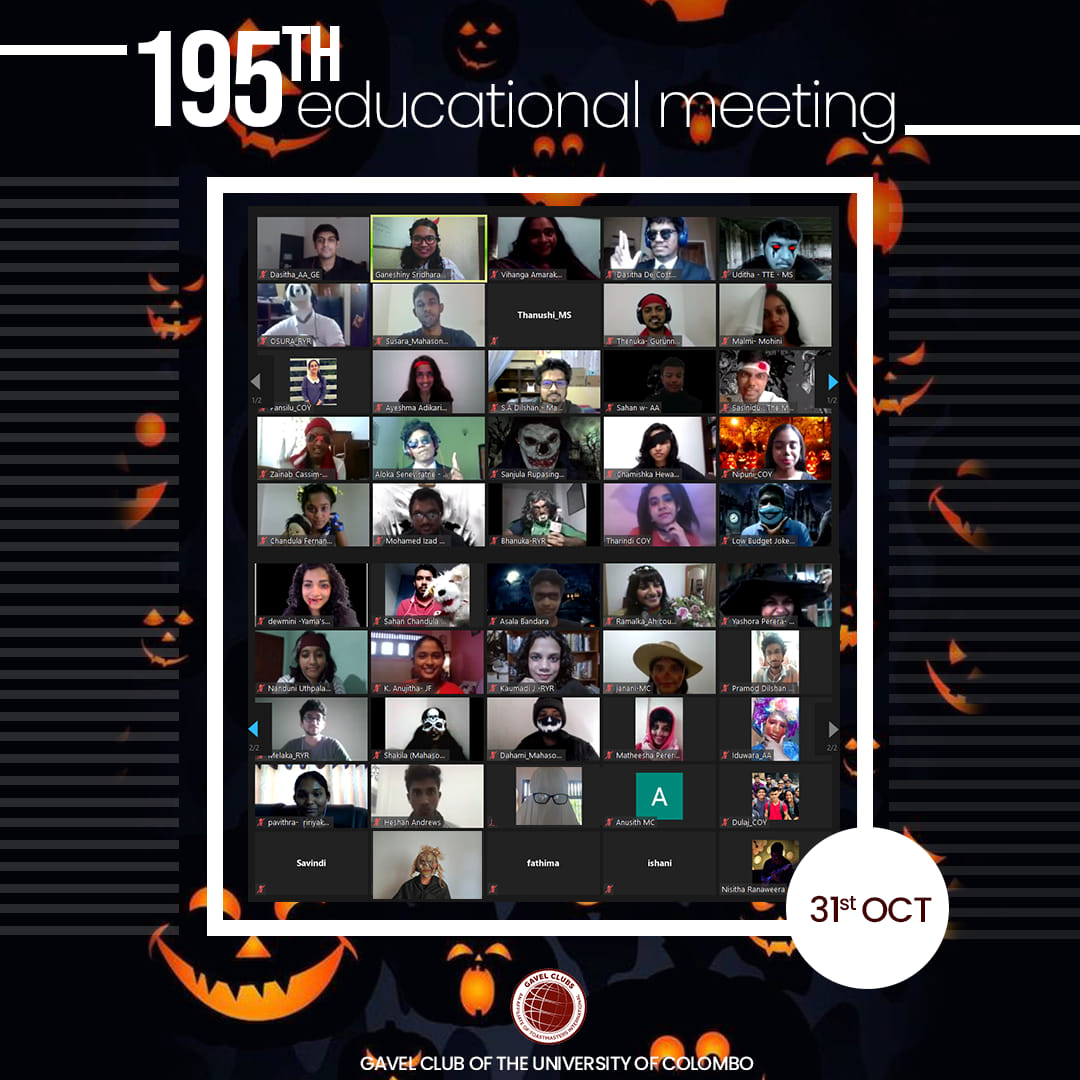 Halloween is the best part of October. Kids waiting to collect their candy for the next few months, while young adults like us are getting ready to dress up as our own “Nightmares”.

But of course, all of this is cancelled because of a pandemic that has been haunting us for months. All of us are basically living in a terrifying nightmare these days. I think the best ‘costume’ for this year’s Halloween would be to dress up as the Coronavirus!

This year, Gavel UOC took characters from Sri Lankan folklore to create teams and play all sorts of fun games at the meeting. We also had a couple of interesting posts created to introduce our team leaders (which I will definitely not share because I was one of them).

The Toastmaster of the Day was “Thenuka Gurunnanse” who introduced the theme and the teams. The wonderful Round Robin session was conducted by GV Chandula, where everyone talked about the evil people they would like to put away and lock in a box FOREVER. Most people wanted to put away their batch mates and some teachers whom they hated at school!

The Table Topic session, which was also a game, was conducted by GV Thanushi. She had some very interesting topics such as “If I was the manager of Hotel Transylvania”, “Beware, I’m possessed by a vampire”, to name a few.

Along with the table topic session, the Halloween games started.

These teams took on the challenges very well and I must say that it turned out to be quite competitive than we had anticipated!

The first game was Pictionary, where each team got a chance to draw something that was suggested to them by our Gurunnanse, and the Reeri Yaka Republic led by GV Aloka won the event. Game Number Two was “Guess the movie”. Everyone was shown a series of clips from a few famous horror movies and the answers flowed in like a tsunami in the chat room. Avathara Alliance dominated the game and placed first on the scoreboard. The final game for the day, “Two Truths & a Lie”, became an interesting one when everyone discovered that GV Dahami has two PET SNAKES at her place! Everyone forgot about the Halloween meeting for a moment and started asking questions on what it’s like to share a roof with two snakes. Luckily we were able to see the snake at the Plain-Tea session later in the evening.

Finally “Galloween Thoilaya” concluded with “Avathara Alliance” stealing the spot of the Winners with the highest scores, and GV Bhanuka from “Reeri Yaka Republic” being crowned “The Most Convincing Yaka” with his out-of-the-world Yaka costume.

Despite all the hardships, the Halloween meeting for the year 2020 (a nightmare itself) turned out to be a fun experience for all the stressed-out-home-in-quarantine Gaveliers!