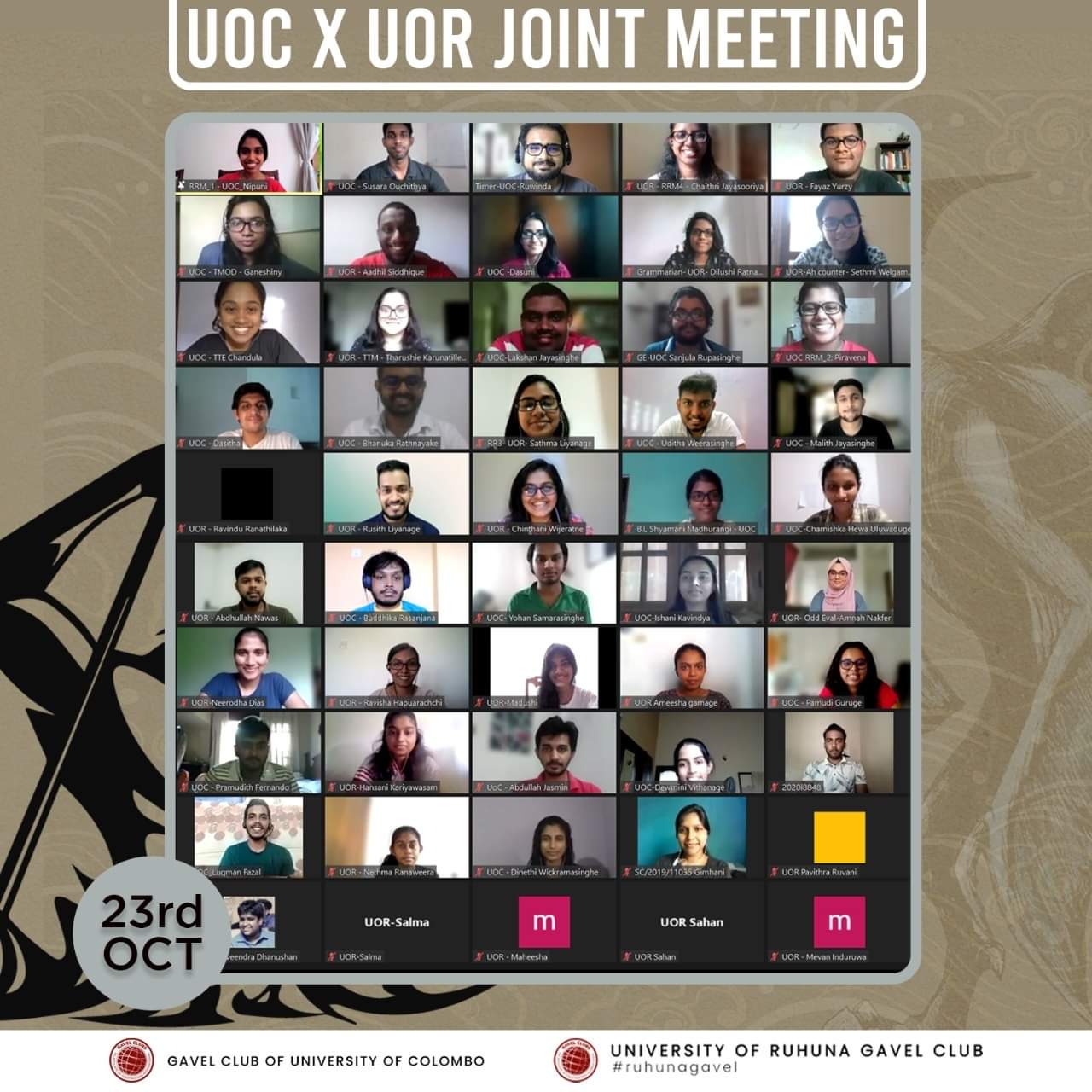 Amongst what felt like a confined series of days for the past year, weekly Gavel meetings tinged at least one day of those monotonous weeks. To top it all, the 23rd of October marked an indelible day as the joint meeting with the Gavel club of University of Ruhuna took place.

The meeting was called to order by the president of the Gavel Club of University of Colombo, GV Susara, followed by passing over the controls to the TM of the day, GV Ganeshiny from UOC who declared a riveting theme: “Myths”. GV Dilushi of UOR, as the Grammarian put forth the word of the day as “Fictitious”.

The Round-Robin session led by the RRM, GV Nipuni from UOC along with the breakout RRMs, GV Piravena (UOC), GV Sathma (UOR), and GV Chaithri (UOR), was filled with numerous stories and beliefs shared by the gaveliers from both the universities. And yes you guessed right, talking about myths wouldn’t pass away without a word or two about Percy Jackson, the ultimate myth series! With the RR session topic, “Myths I wish were true”, the listeners were surprised by how many uncanny and fictitious mythical wishes were latched onto by people.

This won’t be fulfilling if I don’t probe into the details of the captivating Table Topics session conducted by GV Tharushie of UOR where there were eight fabulous topics the speakers could delve into. What’s interesting in this session was that it was a combination of how the two clubs conduct their table topics sessions usually; UOC procedure where the speakers get a touch of the actual impromptu speeches by the topics being revealed a minute before the speakers start talking, and the UOR process where the topics were disclosed at the very beginning of the table topics session. Gaveliers from both sides experienced the diversity of the other, nevertheless, the volunteers for the Table Topics session gave gripping orations as there wasn’t any difference in the routine. Of course, I can’t continue without mentioning those brave gaveliers who grasped the entire session. GV Shyamini from UOC started off right away followed by GV Madushi from UOR. Then GV Samadhi from UOC took upon an undisclosed topic accompanied by GV Uditha and GV Piravena from UOC, and GV Aadhil, GV Abdullah, and GV Ravisha from UOR. I would without a doubt word those speeches as “remarkable” (along with a guarantee from the other participants).

The table topics evaluations were conducted by GV Amnah from UOR and GV Chandula from UOC. The speakers were fortunate enough to have gained thorough feedbacks from the evaluator of the other university respectively.

Eventually, the joint meeting reached the finishing line with the adjourning remarks by the president of the Gavel Club of UOR, GV Fayaz declaring the curtain call of this wondrous collaboration.

It wouldn’t be a Gavel meeting without the legendary plain tea session indeed! With a bunch of gaveliers from both the universities, the plain tea bristled with unstoppable chitter-chatters. It was amazing how we all could bond collectively even though we were more or fewer strangers to each other. It was even asserted from both sides that this joint meeting was one of the best collaborations ever!

Gavel is all about meeting new people, improving your communication skills, and sharing your opinions. And once again, this joint meeting manifested the motive behind all these.

Needless to say, we will be avidly anticipating another tremendous joint meeting with the Gavel Club of University of Ruhuna in the days to come.