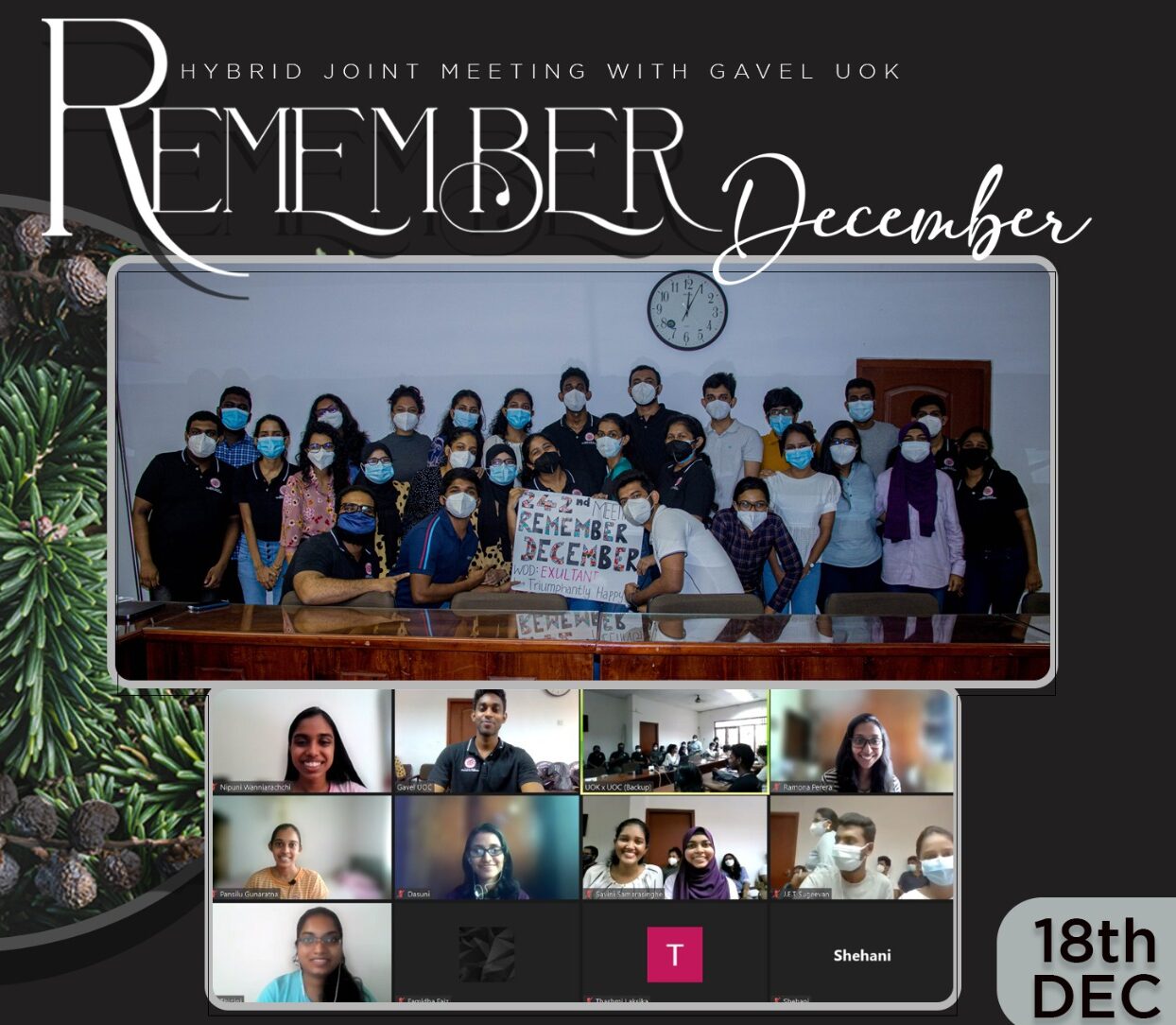 A joint meeting. AND a hybrid meeting. Nothing quite like this had been attempted in the 241-Educational-Meeting history of Gavel UOC, but if there is one thing we know, it’s that Gavel never stops.

The Gaveliers of the Gavel Club of University of Kelaniya and the Gavel Club of the University of Colombo rocked the halls of Tamil Sangam, Wellawatte– just around the corner from Christmas on the 18th of December. The quarantined and the remote congregated on Zoom and the racket that ensued left us in no doubt that today was going to be a meeting for the stories!

It was time for business, and GV Sakuni, President of the UoK Gavel Club started off the proceedings with a proverbial bang. GV Naethree then stepped up to detail her role as the Toastmaster of the Day and shared her goals for the meeting. The enthusiastic applause carried into the introduction of the General Evaluator, GV Chandula, and the TAG Team: GV Samadhi, GV Dushyanthan, and GV Rahma.
The Word of the Day was “Exultant”, which truly captured the mood of the gathering.

Then came the Round Robin Session, headed by GV Sivamayouri. All participants both physical and virtual shared the perfect December of their past or their dreams. Stories ranged from childhood-defining memories to life-defining examinations, vacations to beauty naps; but at its core, we all seemed to be thinking back (or forward) to a place where we could spend our time on our terms, in true holiday style. Up next was the customary screenie, and the virtual participants struck a pose for the camera. As for the physical participants and their Kodak moments, GV Ruwinda had that department covered, as we all got to see in due course!

GV Naethree then introduced the next item on the agenda: Charades. GV Samadhi, GV Singhe, GV Sakuni, GV Madura, and GV Susara took to the stage, and everyone joined in the guessing. The whole affair was highly entertaining, and the faces of the virtual participants who were staring in varying degrees of interest, confusion, and concern were only slightly less so.

In keeping with the spur-of-the-moment performances, up next were the Table Topic speeches. The Table Topics Master GV Savini introduced the ten decidedly festive topics which were up for grabs. GV Sithma, GV Samadi, GV Sakuni, GV Abdullah, GV Zahra, GV Ramona, and GV Singhe took the chance to share their thoughts, which were in turn philosophical, inspirational, anecdotal, emotional…you name it, this Table Topic session had it all–as did the evaluations of GV Dewmini and GV Famidha which brought the meeting towards its conclusion. The General Evaluator, TAG Team, and the TMOT followed suit. The President of Gavel UOC, GV Susara then concluded the meeting, and it was time for the virtual participants to bid our farewells.

Throughout the meeting, I could not help but marvel at how well executed it was: any and all technical hiccups were smoothly handled by GV Dasitha and GV Susara, so much so that the virtual members were involved and wholly immersed throughout–not relegated to spectators but very much involved players. The spirit of the season could be felt even from miles away. That being said about the meticulous planning, the methodical organizing, it is the people that truly make the party in the end. The good cheer was contagious (knock on wood), and something I recall fondly, even as I write this now, a few months since. And I think I speak for everyone who was present that day when I say that the 242nd Educational Meeting of Gavel UOC made the conclusion of 2021, truly a December to remember.