To Galle and back 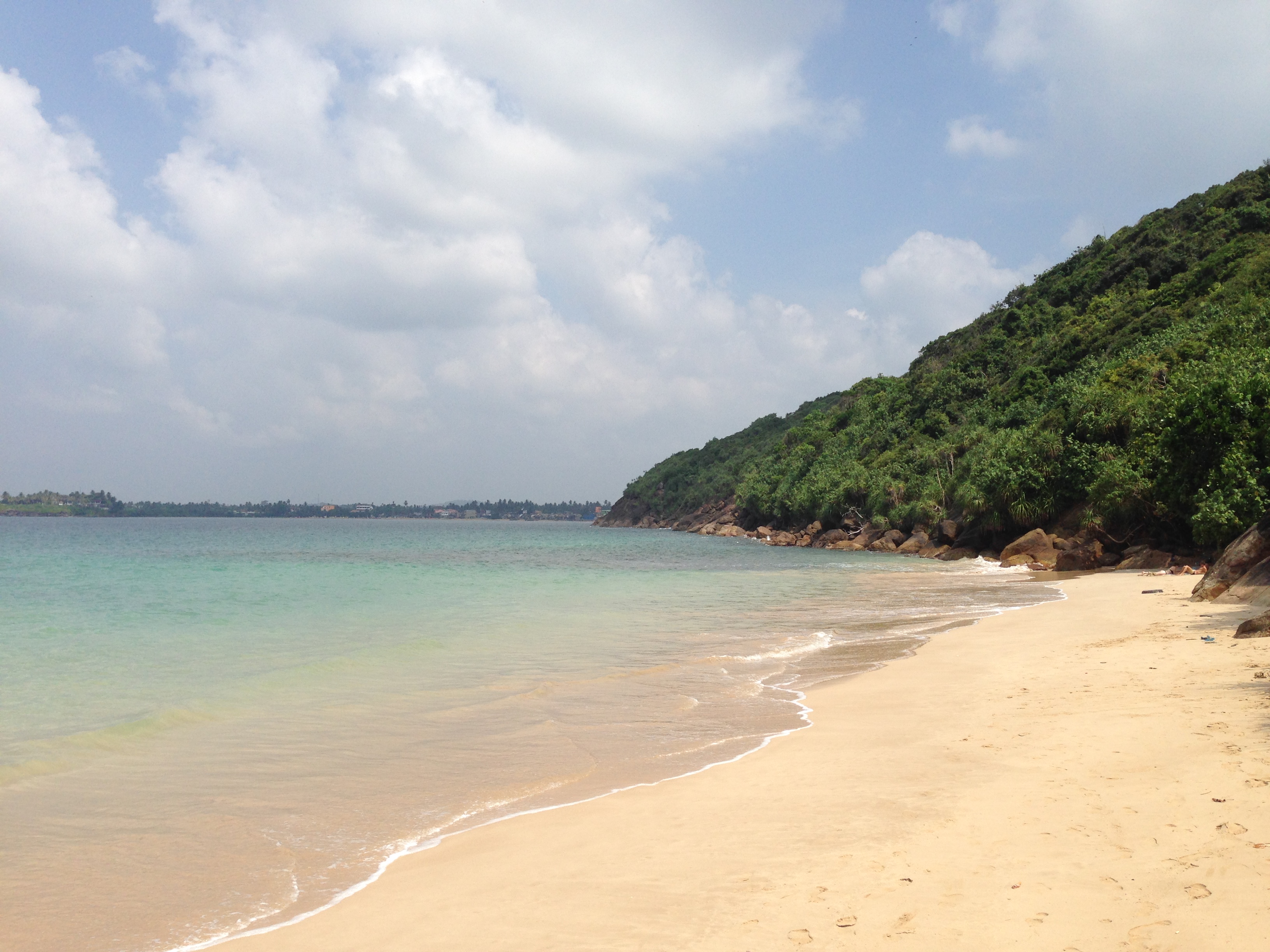 I still hear the sound of the waves in the ocean… or maybe it’s just the fan in my room. Aanyway the “beginning of the year bonding trip” of our Gavel Club happened last Wednesday (27th ) and this is my reminiscence of it.

After being stuck at home from a weird form of tonsillitis (did I spell it right?) , I was starting to go sane (yeah you heard me right) . So I thought to myself “Dude you gotta do something about this yo! you’re becoming…normal” and I realized that I needed a change of scenery. For some reason, I prefer sunny beaches over cold mountains (as if Colombo wasn’t hot enough XD) so I was really looking forward to this outing.

I try not to have high expectations from pretty much anything so that it reduces the amount of disappointment I might have to face but this trip really got to me. There was really nothing special about it but somehow everything was in perfect sync that it was very satisfactory by the end (say whaaat?) Everybody was on the train at fort by 6.45 a.m. Nope, there was no dramatic last minute hectic running, nobody was lost and nobody lost their tickets and had to ride the train illegally. Yep…so very normal. Like Saitama from Onepunch-man (anime/manga fans would know).

Throughout the train trip everybody was chillin’ and chattin’ and for some reason, singing didn’t even cross our mind. This is what I like about Gavel. Everybody is very chill and is really good at communicating with each other (those table topic sessions are paying off eh?). They are a pretty free bunch. I believe it’s because of the environment that we’ve moulded within the gavel over the past year during our meetings. We’ve learned a great deal about ourselves, we’ve shared a lot of our stories (even stuff we don’t discuss anywhere else 😉 ) and that had made us very comfortable around each other.

Farha said some of her “golden quotes” as usual and we had a good laugh about it (she’ll probably kill me for this when she reads it *sigh*). Harinda found a lost phone (I think) and returned it to its rightful owner (I think) , somebody brought a selfie stick and at one point, Fadil was pitching his startup to the whole train compartment. There was this one incident though where Yasanthi and Sathya were attacked by a fake rubber snake which was pretty hilarious I guess. Before we knew it we were at Unawatuna. Can anybody tell me whether the Unawatuna train station is run by ghost employees? ‘cause I didn’t see a single soul there apart from us. Not even anybody at the ticket counter. >>Fast forward to the beach.

The beach was amazing. I didn’t really intend on getting in the water but after seeing all its beauty I told myself “ah screw it, I’m getting in” (thanks for the shorts Warren). If that beach was a girl, she could be described as the mysterious girl that just pops up in your dream every now and then but when you wake up, you have no idea who she is yet you have this gut feeling that she was the “it girl”…or am I the only one who has those weird dreams?…wait..I am?…ooookay that wasn’t awkward at all. Basically she’s the pleasant version of Samara from “the ring”, except this movie is “high school musical”…or “twilight”…maybe not twilight. SO yeah, it was a pretty mesmerizing beach.

Again, there was nothing out of the ordinary in this place but there was magic in how everything was just in the right place at all times. We realized that Harinda was more than a hermit when he pushed the potato-chips- eating Thejani into the water. We realized that Thejani was more than a docile potato- chips-eating girl when she violently (don’t worry it’s the fun type violence) tried to return the favour back to Harinda. To my surprise, Farha’s Sister’s friend (whose name I would discover after a few more hours) revealed that it was actually her first time travelling by train! (u wot m8?). she went on to say that she isn’t afraid of trains anymore. Kids, don’t take her words to your heart. You should always be afraid of trains. When a train is coming straight at you with full momentum (choo choo madafada! :P), I sincerely hope that you don’t gain Santhushya’s (did I spell it right???) boldness towards trains and be like “come at me brah!”…’cause that’ll get you killed (literally). As I was drifting in the warm salty water I realized that I had no profound thoughts running across my mind. I thought maybe I should be thinking about deep stuff…like Quantum Chromodynamics.

But I had no enlightening thought…really…it was just…normal stuff. Cinematic protocol suggests that moments like this is where I awaken my sharingan or go full-on super saiyan or accidentally puke magic but instead I just drifted… like Patrick the star. After coming out of the water I realized that I was really sticky. Well to be honest I did expect this. However, it didn’t really bother me as much as I thought it would. Back at the beach we had to do some promotional videos. Couple of shots of awkwardness later, the videos were done (yay!). Especially Dilanga. That was some cool acting bro. Everybody was on a really good vibe. I swear I mistook Nishadi for a monkey at some point the way she was all up in the trees in her own little monkey world. Nirusan…well, I”ll tell you about Nirusan later. After much thought we decided to go to Gihan’s aunty’s place to have our lunch.

There was a certain misadventure that involved 4 took-tooks but it was no biggie. NO, nobody tried to kidnap us and NO there was no fight. It was a simple miscommunication that caused some of us to take a U turn a go back a few meters…yep, that’s about exciting as it gets. Gihan’s Aunty’s place…man that’s a really cool place. I wish we could’ve overstayed our welcome (at least a couple of days 😉 ) but we decided not to. They were really nice to us…except for the dog. Personally, I love dogs. This dog was a real stuck up dog. I’m pretty sure it saw the words “food” every time it saw us. We tried our best to not meet its gaze.

When I look back, I’m really glad that Gihan came with us on the trip because without him, so many things could’ve gone wrong from lunch to took-took rides to catching a train (you get the idea). In Gavel, he’s the responsible one and he really sees things through which is really cool. After that, we said our goodbyes To Gihan and his family and It was another race on took-tooks to catch a train from Galle…is what you expect me to say right? Actually we got to the station ten minutes early and we were saying goodbye to Sadeepa (who successfully finished her journey to mordor to destroy the ring 😉 ). Nope. No sad tears bro. A very plain old goodbye. The Train arrived on time (okay well maybe that IS actually pretty darn magical) and we were on our way back. (Bye bye Galle). On our way back, most of us were tired so most of us slept. There was an argument between Harinda and Sameetha (oh things just got interesting !…*grabs popcorn*). Harinda wanted to offer the corner seat by the window to Sameetha but SHE JUST DID NOT WANT THAT SEAT! (…maybe not *puts popcorn back* ). After much persuasion, Harinda finally managed to convince Sameetha that she really did in fact need that corner seat by the window in order to have a meaning to life .So they switched seats. End of story. Menuka really enjoyed riding the footboard of the compartment (Kids, don’t try this). After a while, he too got tired and slept…in a seat, not the foot board (duh). Now, about Nirusan. This guy is pretty cool. He travelled all the way from Jaffna just to go on this trip with us. So basically, he travelled from one corner of Sri Lanka to the other corner and back in a SINGLE DAY! IF that’s not commitment and passion, then I don’t know what it is. And the sweets! OH those glorious sweets! I still see them in my sleep, The sweets that nirusan brought…and I wake up to find myself drooling all over my pillow. Last time I saw those sweets on the train, they were with Amaaya (R.I.P : LADDU). She really liked them. Maybe a tad bit too much (haha, just kidding Amaaya…or maybe not!…haha relax Amaaya I’m only joking…or not). Then people started getting down from Panadura, Moratuwa and Dehiwala and at last, we reached Fort. End of the trip. It was nice. No, “nice” is an understatement. It was pretty darn satisfying! No drama, no mishaps, just plain, clean fun all the way with everything falling into place. If you’re thinking of skipping Uni and going on a trip with a bunch of friends then this destination is optimal for you both cost-wise AND time-wise. However, this is only for those of you who want a beachin’ time! (hahaha…get it? No? *sigh* note to self: that’s a lame joke…of all things you just had to say beachin’ time neh?) Cheers guys and girls (or in Farha’s words : Cheers, Your people and my people!) Anudha Chitresha Vice President – Public Relations Gavel Club | University of Colombo