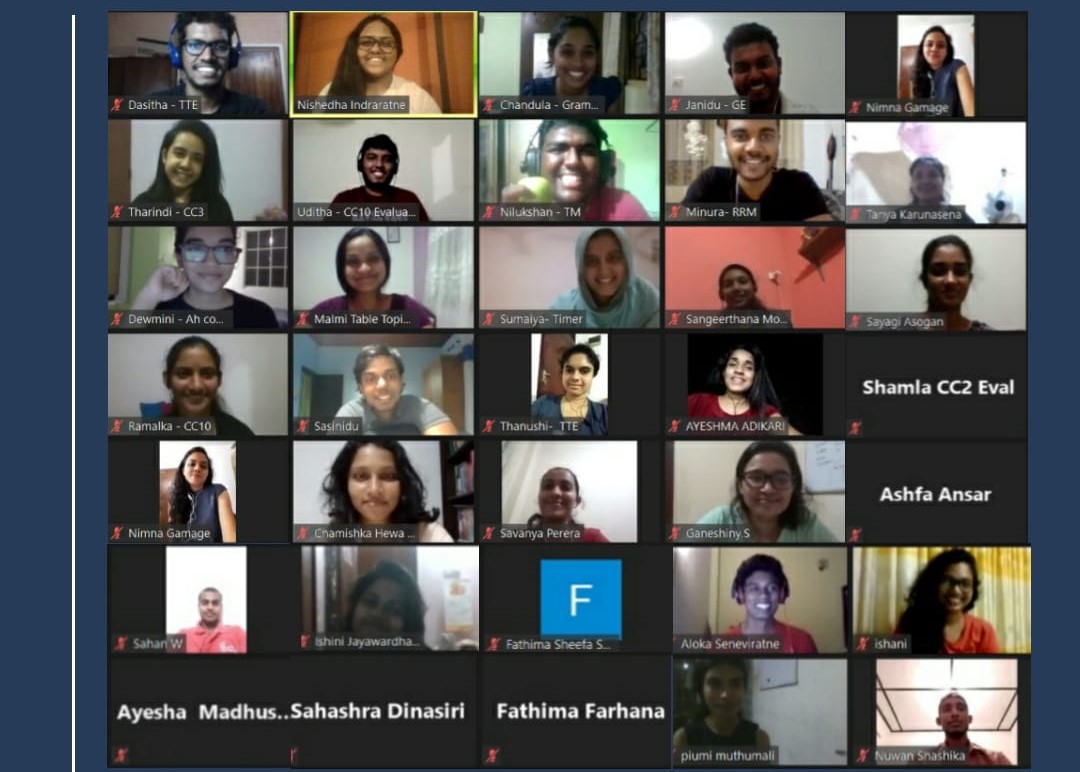 What a meeting! This was the thought that came to my mind when we finished the 183rd meeting in our calendar. When? 8th July. Where? Well, wherever our Gaveliers found their internet connection strongest. At what time? 5-7 pm (it obviously did go longer than that, but we’ll say 5-7 just for now). But most importantly it was the time to bond with a new Gavel fam, Gavel Club of South Eastern University of Sri Lanka, and to get an epic surprise from our Toastmaster of the Day GV Nilukshan and his team.

Since we had a brand new Gavel Club in the house our President Uditha first gave an on-point description about what is an Educational Joint Meeting is and how Gavel UoC does it. Then to start off the meeting, he gave the controls to the Toastmaster of the Day, GV Nilukshan. Now in every Educational Meeting, we go with a theme, a timely topic to talk about. So I personally thought that it must be something related to lockdown, Covid-19, the University, or something thing that has happed in the world or in the universe (at the worst-case scenario). But this time our Toastmaster of the Day GV Nilukshan and his team had a whole different plan in mind for this meeting. When he announced the theme, everyone, including me, went… “Wait…WHAT?!” and I’m sure you will have the same question mark in your head when you read the theme. And that was “Apples”. Yes, Apples. Everyone went blank for a second and began to think about what we have to talk about an apple? Since it was quite obvious for Nilukshan and his team that we are clueless about what to talk about, he made us even more confused by throwing mind-blowing apple facts in the middle of each session. If you want to know what those apple facts are, keep reading guys!

After that confusing theme announcement, he called upon the General Evaluator GV Janidu to introduce his team of Evaluators- Ah-counter GV Dewmini, Timer GV Sumariya, and Grammarian GV Chandula. To the surprise of all of us, the word of the day was “surprise”.

Continuing the surprise attacks for this meeting, our Round-Robin master for the Day GV Minura created another twist, where we all have to create a story about an apple and continue the story of the previous person (In a usual RRS we have to start speaking with the last word that the previous speaker utter). With the wild imagination of our Gaveliers, the session got weirder and weirder. I’ll give a quick recap of what twisted story we managed to pull out, but if you want to know a detailed version of this RRS, check out our GV Nishedha’s article. Okay, so it started with a simple ‘apple falling scenario’ like what Newton had to go through in order to discover Gravitation, but the next thing you know our president GV Uditha and our Toastmaster of the Day GV Nilukshan are throwing apples at each other for no reason ( for your information our President started the battle). So just like that our President became the ‘Apple President’, made it to the national news, wrote a book about the ‘story of the apple bite’ while in the end, it turns out that Uditha has started this battle to find out the speed of throwing apples in his dreams. Along the way, all of those apples went to the museum. Oh.. and on a side note, some people got turned in to frogs.

Next, we had the Prepared Speeches in line, but before that TOD GV Nilukshan threw his first apple fact, which went as: “did you know that 25% of the whole apple is filled with nothing but air? Yes. That’s why it floats when you put them in water.” I don’t know about you guys, but seriously that was an applish fact to remember.

Now if you think the Prepared Speeches were boring, then you are wrong my friend. We got to witness the CC10 of none other than our GV Ramalka, basically a legend in Gavel UoC. She inspired us all by telling her story of how she got strength from lifting herself up and facing her challenges without fear.

Next, it was GV Sasinidu’s turn. “Screw it lets do it”, this title of a famous book by Richard Branson got him inspired to do his CC2 about how he managed to take up all the challenges in his life, although he still hasn’t managed to read the whole book. (According to him it is a big book guys)

Next, it was our Illuminate 2020 Champion, GV Tharindi’s turn to do her CC3. She also didn’t fail to inspire us with her weight loss story, which ended with the famous quote ‘one step at a time’.

TOD GV Nilukshan again threw a mind-blowing fact about apples, but this time he was referring to Apple iPhones. “The famous technological venture Apple Inc. is twice wealthier even than the treasury of the United States”.

Next, we had TTM of the Day GV Malmi continuing the tradition of this meeting to give twisted sessions and gave us only one-word to speak about in the TableTopics. ‘Instagram’, ‘memes’, ‘mistakes’, ‘fragrance’, and ‘money’ were those words she had picked for us. I must say, our Gaveliers took the challenge pretty well.

The last apple fact was on the table by our TOD GV Nilukshan, who stated that “Eating so much of apples will cause you a lot of trouble. Because the seed of the apples contains a reasonable amount of cyanide (a deadly chemical) to kill you when you take in a lot”. According to him, “an apple a day might not always keep the doctor away. It might actually make a doctor’s day”. Who saw that one coming, am I right?

After that, all the speakers got strict evaluations by GE GV Janidu and his team. Last but not least the 10-second smiley face for the camera was always there by the end of our meeting. Since we had near 50 gaveliers, and did not fit the laptop screen at once, we had to smile 20 sec this time, 2-sec break in the middle.

Then the President of Gavel SEUSL GV Sumaiya adjourned the meeting after thanking us for the wonderful opportunity for the exposure and they had gained. As the Editor of Gavel UoC, I would like to say that it was our pleasure to have you guys. We are honored to share the first Joint Meeting of Gavel SEUSL and we really hope to see you guys in another awesome Joint Meeting. It is with that, that the 183rd Educational Meeting of Gavel UoC came to an end.